Garbage on the Beach: Flood of Waste Stirs Uproar in Lebanon 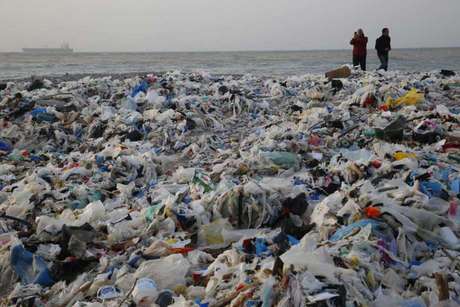 Lebanon's festering trash crisis came crashing ashore this week, after residents woke up to find a powerful winter storm had laid a mantle of waste at a beach just a minutes' drive north of the capital, Beirut.

The scenes were a national embarrassment for a country that once prided itself on its sparkling Mediterranean coastline but appears unable to wean itself off the convenience of throwing its trash into the sea.

"Somebody needs to pay for this," said Paul Abi Rached, a local environmentalist who spearheaded a campaign to overhaul the government's waste policies three years ago.

Few issues have driven a wedge between the Lebanese and their leaders like garbage — the most conspicuous of the government's many failings to provide basic services to its constituents.

Lebanon has long been plagued by daily water and electricity outages, but it was not until the trash started going uncollected in Beirut that despair erupted into a wave of protests in 2015.

Demonstrators rallied under the banner "You Stink" — a reference not only to the stench accompanying the summer heat, but to the corruption and favoritism that has defined politics and paralyzed administrative services in the country.

Civil society groups say officials are making fortunes on shady deals for landfills and incinerators, at the public's expense. They say, too, that the government is using trash to fill in land along the coast — a bonanza for politically connected developers who can cash in on the property that's been raised, quite literally, from the sea.

A fleet of heavy machinery has been working the coastline east of Beirut since 2017, pouring trash into the sea at a land reclamation site at Dbayeh.

Officials say they are doing nothing untoward, and that the landfills they operate are done to technical specifications.

But the stench is impossible to deny.

Travelers arriving to Beirut's Rafiq Hariri International Airport are greeted with a waft of odors from an expanding landfill at the end of one of the runways. After years of being unused, officials reopened the Costa Brava landfill to absorb the trash left out in 2015.

In December, Prime Minister Saad Hariri ordered officials to close a waste-sorting plant in the city of Tripoli, built with $1.6 million from the European Union, just six months after it was inaugurated. Locals said the odors from the plant and the nearby fill were suffocating.

The scandal at Zouq Mosbeh beach led Lebanon's nightly news broadcasts on Monday, but environmentalists say they were not surprised by the scene — a pile of cattle bones, footwear, tires and vast amounts of plastic waste towered over 30 meters (100 feet) high on the beach.

"The sea is regurgitating our trash," said Joslin Kehdy, who heads Recycle Lebanon, an NGO that has organized a clean-up of Zouq Mosbeh beach each year since 2015. The country's official waste management plan provides scant support to recycling initiatives.

Abi Rached said this time, rough waves broke down a faulty retaining wall around a coastal dump just east of Beirut, spilling the trash into the sea.

The garbage saga is likely to spill into campaigns ahead of parliamentary elections in May. Lawmaker Sami Gemayel, who leads the country's Kataeb party, said he would take the government to international court over the pollution.

Prime Minister Hariri said he ordered authorities to clean the Zouq Mosbeh beach immediately but those efforts may have to wait for another storm to pass through — and bring even more waste ashore.

The New York-based watchdog says the Lebanese government is in violation of international human rights law for failing to deal seriously with the pollution from burning waste.