Iraqi Militia Vows to Back Hizbullah in War with Israel 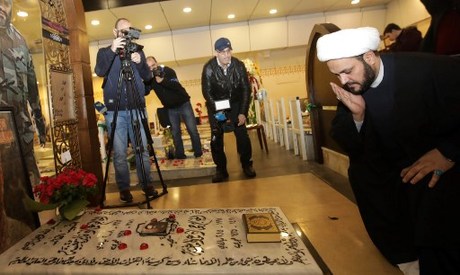 The head of the powerful Iraqi militia Harakat al-Nujaba pledged on Tuesday to stand alongside its Lebanese ally Hizbullah if a new war breaks out with Israel.

Harakat al-Nujaba and Hizbullah have fought side-by-side to bolster Syrian government troops since 2013, most prominently against the Islamic State group in eastern Syria.

On Tuesday, the movement's secretary general Akram al-Kaabi visited the tomb of top Hizbullah commander Imad Mughniyeh to commemorate the 10 years since his death.

Kaabi spoke in Beirut's southern suburbs, where Hizbullah has a strong support base.

Both Harakat al-Nujaba and Hizbullah are backed by Iran. They fought alongside Syrian government troops and other allied militia to oust IS from key cities in eastern Syria last year, including Albu Kamal.

In June, Hizbullah chief Sayyed Hassan Nasrallah warned that hundreds of thousands of Arab and Muslim fighters would be ready to fight against Israel if it waged a new attack.

It "would open the door for hundreds of thousands of fighters from all around the Arab and Islamic world to participate in this fight -- from Iraq, Yemen, Iran, Afghanistan, Pakistan," he said.

Kaabi is the second top Iraqi militia leader in recent months to come to Lebanon in a show of support to Hizbullah.

Men of honor will always stand by each other against zionists and their salafi slaves.

But...I thought Hezbollah were so strong with so many surprises that they did not need any help. Espesially not from people that Saddam Hussein alone managed to control for all those years until USA came to their resque...