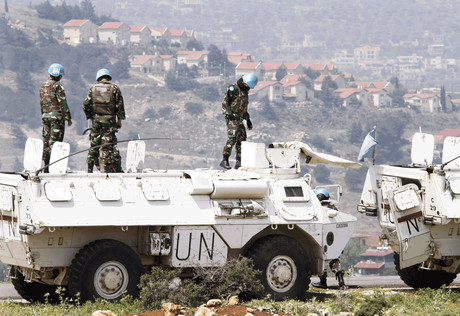 “UNIFIL is aware of these media reports which contains clear inaccuracies. UNIFIL is working around the clock and carrying out some 450 operational activities each day. We have close coordination with the Lebanese Armed Forces, almost 40% of our activities are carried out at night,” said Tenenti.

He stressed saying “the UNIFIL highly values its strategic partnership with the Lebanese army mainly in the implementation of UN Security Council Resolution 1701. The Lebanese army is an integral part in preserving the calm and stability in the UNIFIL area of operations.”

Israeli media have accused the peacekeeping forces in Lebanon (UNIFIL) of becoming an “excuse for Hizbullah and the Lebanese government to violate UN resolution 1701.”

Israel fought a month-long war against Hizbullah in 2006, killing more than 1,200 Lebanese, mostly civilians, and more than 160 Israelis, mostly soldiers.

Resolution 1701 was adopted to end the war, calling for full respect of the Blue Line.

Israeli media have accused the peacekeeping forces in Lebanon (UNIFIL) of becoming an “excuse for Hizbullah and the Lebanese government to violate UN resolution 1701.”

and they are spot on!

Is UNIFIL preventing Hezbollah from being south of the Litani?
Is UNIFIL not seeing Hezbollah conducting pre-jihad tours of the border for shia Iraqi and shia Iranian militia heads?

It is not uncommon for the UNIFIL soldiers to be found hanging out at Bars in Beirut and Achrafieh chasing women.

To them the assignment to UNIFIL is a vacation filled with frills and privileges.

Israeli stooge, you support the Israeli slams then against the Lebanese Army and United Nations.

Can you refute any of the facts @marcus presented? Of course not; so you resort to insults and calling him an 'israeli'.

Refute Israeli claims, why should I?

You are the enemy of Lebanon after all, and that is final.

The same so called facts you present, are the same as the Israeli enemies.
Which makes you an Israeli, or even worse, a traitor.

Lol Mystic you are posting every minute, don't u have a job man ?

Is UNIFIL preventing incursions of Lebanese airspace by Israel? This makes me a Lebanese stooge

If you were correct Hezbollah would have arms and missiles south of the Litani, which UNIFIL has verified over and over they do not have. Hezbollah has made amy sacrifices to ensure its strict compliance with 1701.

"Resolution 1701 was adopted to end the war, calling for full respect of the Blue Line."

1701 is a lot more than 'espect of the Blue Line' and hizbullah moves freely within UNIFIL's theater of operations and with their knowledge.

UNIFIL are helpless and often they are attacked by hizbullah ( dressed in civilian clothes ) and pelted with stones. UNIFIL cannot even take pictures inside southern villages or else they will be attacked and their cameras destroyed.

grow up you POS! For once post something of substance instead of trolling.

and calls himself 'patriotic' or 'mowaten'.