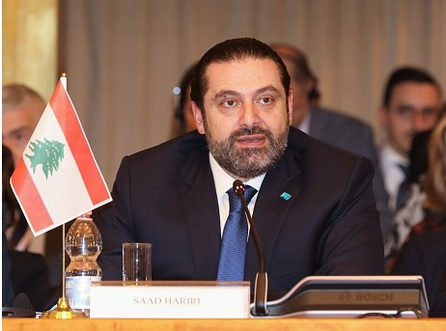 Prime Minister Saad Hariri on Thursday promised the Rome II Conference, aimed at rallying support for Lebanon's army and security forces, that the country's leaders will discuss a national defense strategy after the upcoming parliamentary elections.

“Thank you, the representatives of 41 nations gathered here today. Your presence is a clear indication of the importance you give to Lebanon’s security and stability. It is also an acknowledgment of the role Lebanon plays in stability across our region,” Hariri said at the opening of the conference.

“It is a testimony to the need to build our State security institutions, the sole defenders of Lebanon’s sovereignty,” Hariri added in an English-language speech.

He noted that the Lebanese government “recognizes that it is enjoying an exceptional moment of international consensus and support.”

“We consider that it is in our national interest to preserve this international consensus and as such, we are committed to doing our part,” Hariri vowed.

He added: “The President of the Lebanese Republic, Michel Aoun, announced three days ago that the National Defense Strategy will be discussed following the legislative elections in May. I join President Aoun’s call to the International community to support the Lebanese Armed Forces, to enable them to assume their duty of preserving security and stability in accordance with the National Defense Strategy.”

“We have committed to investing in our Army and Security Forces in our new budget. Together, with your support and commitment, we can build a strong partnership in safeguarding Lebanon’s state institutions,” Hariri went on to say.

He added that his government’s priority is to “create a virtuous cycle of security, stability, growth and employment for Lebanon and the Lebanese.”

“Rome II is a first step towards achieving this and will be followed by the CEDRE and Brussels conferences. Indeed, stability and security are underlying conditions for economic growth and prosperity,” Hariri pointed out.

He noted that on December 5, the Lebanese government with “all its components committed to the policy of disassociation.”

“This is today a collective responsibility. It is closely monitored by all State institutions to ensure it is executed to Lebanon’s national interest in keeping the best relations with Arab countries and the international community at large. I ask you all to give Lebanon the chance and the time to accomplish,” Hariri added.

Thanking Arab nations taking part in the conference, the premier underlined that the Lebanese “will never forget everything” they have done to support Lebanon.

“We are happy you are here today to renew your commitment to Lebanon’s stability,” he said.

He added: “My Government remains committed to ensuring that the LAF (Lebanese Army) and the ISF (Internal Security Forces) continue to work together on the strategic level and to embarking on a major, long-awaited reform agenda in the security sector. It also remains committed to Security Council Resolutions 1701 and 2372 which in itself urges international support for our Armed Forces.”

Hariri revealed that Lebanon “will be sending more LAF troops to the south” and that it intends to create a new regiment for this purpose.

“We thank UNIFIL and all the Troop Contributing Countries for sending their men and women to maintain peace and security on our southern border, the calmest border in the Middle East,” Hariri added, referring to the United Nations Interim Force in Lebanon.

The premier warned that Israel “remains the primary threat to Lebanon.”

“Its daily violations to our sovereignty must stop,” he urged.

“While we are thinking of ways to move from a state of cessation of hostilities to a state of permanent cease-fire, Israel continues to make plans to build walls on reservation areas along the Blue Line,” Hariri warned.

He pointed out that strengthening Lebanon’s security institutions will “strengthen rule of law.”

Hariri also took the opportunity of the conference to pay tribute to “the courage, bravery and commitment of the men and women of the Lebanese Military and Security Forces.”

“Stability is not granted. We have to work for it every day. The time for mobilization and for coordination is NOW. Together, we are facing a global threat that commands a global reaction. Lebanon is ready,” the premier added.

Hariri is accompanied by the ministers of defense, interior and foreign affairs; the chiefs of the army, Internal Security Forces and General Security; Lebanon's ambassador to Italy; the director of his office Nader Hariri; his adviser on military affairs retired Brig. Gen. Maroun Hitti and a large number of officers.

A statement issued Wednesday by Hariri's office said “the Lebanese delegation to the conference is carrying a comprehensive plan that will be presented to the participating countries with the aim of supporting the army and the security forces for a period of five years.”

The conference kicked off at 4:00 pm Beirut time with a speech by Italian Prime Minister Paolo Gentiloni. Speeches by Hariri and U.N. chief Antonio Guterres followed.

Speaking to reporters upon his arrival in Rome on Wednesday, Hariri hoped the meeting's outcome will be “very positive” in order to “enable the Lebanese army and security forces to continue to perform their missions in preserving security and stability and implementing U.N. resolutions.”

Asked about the Arab support for the conference, Hariri said he expects “big support.”