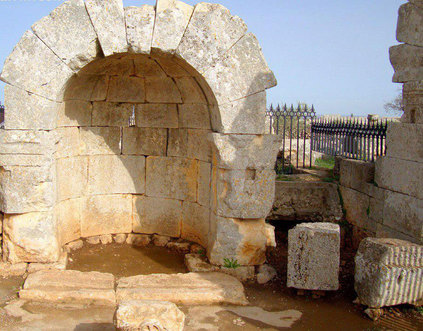 Turkish air raids have damaged an ancient Christian heritage site in northeastern Syria near the city of Afrin which Ankara-led forces captured at the weekend, Syria's antiquities department said Thursday.

"Turkish regime planes bombed the archaeological site of Brad, 15 kilometers (about nine miles) south of Afrin city," the Directorate-General of Antiquities and Museums said in a statement.

It said that Brad -- which includes many Byzantine churches and monasteries as well as tombs dating back to the Roman period -- has been on UNESCO's world heritage list since 2011.

"The bombing destroyed many important archaeological buildings," including the tomb of Saint Maron of the Maronite community, said Syrian antiquities chief Mahmoud Hamoud.

Also destroyed was "the Julianus Church, which includes the mausoleum and is one of the oldest Christian churches in the world, built at the end of the 4th century," he added.

At the end of January, Syria accused Turkey of damaging the 3,000-year-old iron age neo-Hittite temple of Ain Dara as it pressed its bombardment of the Afrin region.

But the Turkish military said "religious and cultural buildings, historical sites, archaeological ruins and public facilities are absolutely not among the targets" of the offensive.

The tomb of Saint Maron was discovered by a French archeological mission in 2002.

"This site is one of the most beautiful pages of the history of Christianity. It is home to three churches, a monastery and a five-meter-high tower," Syria's former antiquities chief Maamoun Abdulkarim told AFP.

In Janurary he had voiced concern for a group of 40 ancient villages in the Afrin region, which UNESCO calls "Ancient Villages of Northern Syria" and includes on its world heritage list.

UNESCO says these villages provide, among other things, "an exceptional illustration of the development of Christianity in the East, in village communities."

Syria's seven-year war has killed more than 340,000 people, displaced millions and ravaged its archaeological heritage since it started in 2011.

Maronites are a branch of the Catholic Church and are indigenous to Syria and Lebanon. In Lebanon, the president is chosen from the Maronite community named after Saint Maron.

This is very bad. Whoever did this should be held responsible in an international court.