Damascus Controls Over 90% of Ghouta as Harasta 'Emptied' of Rebels 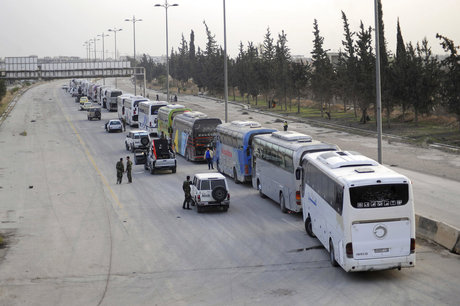 Syrian state television said a bombed-out town in the one-time rebel stronghold of Eastern Ghouta outside Damascus had been "emptied" of opposition fighters on Friday.

Syrian state television announced "the end of the evacuation of fighters and their families from Harasta... Harasta has been emptied of terrorists," it said, referring to the rebels.

The Syrian Observatory for Human Rights, a Britain-based monitor, said after the evacuations that the regime had retaken control of more than 90 percent of Eastern Ghouta.

A blistering regime assault since February 18 on the last opposition bastion outside Damascus has splintered remaining rebel territory into three shrinking pockets, each held by different factions.

Damascus and its ally Moscow have implemented a "leave or die" strategy with deadly air strikes on the enclave.

Retaking Eastern Ghouta, a sprawling semi-rural area which had escaped government control since 2012 and lies within mortar range of central Damascus, was made a priority by the regime this year.

Harasta's evacuation came as part of a deal negotiated by Russia, which has played a key role in the deadly offensive launched against the enclave on February 18.

Each one of the three pockets has come under intense bombardment, essentially forcing the rebels that control them to sue for an evacuation.

The offensive on Eastern Ghouta has caused widespread outrage and marked one of the darkest episodes of a war that entered its eighth year this month.

The Observatory says that more than 1,600 civilians have been killed in just over a month.