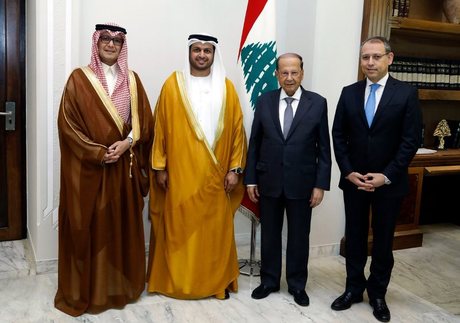 President Michel Aoun on Wednesday urged Saudi Arabia, the UAE and Egypt to help in returning Syrian refugees in Lebanon to their country, in talks with the envoys of the three powerful Arab nations.

“Lebanon is keen on having the best relations with Arab countries and it cannot be an arena for interfering in the affairs of any Arab nation,” Aoun said in Baabda, in a meeting with Saudi charge d'affaires Walid al-Bukhari, UAE Ambassador Hamad al-Shamesi and Egyptian Ambassador Nazih Naggari.

The National News Agency said talks tackled “the developments in Lebanon and the region and ties between Lebanon and each of the UAE, Egypt and Saudi Arabia.”

“Lebanon has always called for the unity of Arab brothers and their solidarity,” Aoun told the ambassadors, reminding them of his speeches at the last two Arab League summits where he called for a round-table dialogue aimed at reaching “common denominators that preserve the unity of the Arab stance as well as solidarity and cooperation.”

The president also lauded “the role that Lebanese are playing in the Arab Gulf countries and Egypt, especially in terms of contributing to developing the economy of the three countries.”

Separately, Aoun asked the three Arab envoys to urge their countries to help in repatriating Syrian refugees in order to “stop their suffering and put an end to the repercussions that this refugee crisis is causing to Lebanon at the social, economic, educational and security levels.”

Almost one million Syrians are registered as refugees in Lebanon, though many expect the real number is much higher.

Syria's war has killed more than 350,000 people and displaced millions since starting in 2011 with the brutal repression of anti-government protests.

The U.N., the EU and major world powers have recently warned that “present conditions” in Syria are “not conducive for voluntary repatriation in safety and dignity.”

Why don't you ask your bosses in Tehran and Damascus to help you return the refugees since they are the main reason we have Syrian refugees.