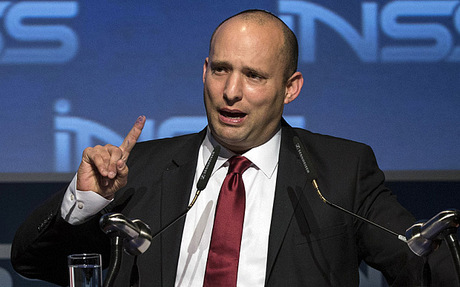 An Israeli ministers said on Monday that high Hizbullah results in the country’s parliamentary elections, means Israel “will not differentiate” between Hizbullah and the State of Lebanon in any future war.

“The results of the elections in Lebanon have been based on our perception for some time: Lebanon equals Hizbullah,” said Israeli minister Naftali Bennet on Twitter.

“Israel will not differentiate between the sovereign State of Lebanon and Hizbullah and will see Lebanon responsible for any action emanating from its territory,” he added.

The Hizbullah-AMAL Movement coalition's campaign also said its list won four seats in Beirut's second district -- one for Hizbullah, one for AMAL, one for al-Ahbash and one for the Free Patriotic Movement.

Our president, Our Army, Our Prime Minister, and Our Speaker all agree with you.

shias are not considered people; sorry ya irani.

'Pity Of You' Patriotic Southern......
You Will Be Caught!

When did Israel "differentiate" between Hezbollah and Lebanon?
Even when it was PLO in the 80s Israel still did not differentiate between this Lebanon state and the PLO.

In 2006 war that you 'won', Israel did not hit one state building. You recall or must we remind you?

And yet they still hit the LAF state troopers in 2006.
So what was your "point"?

Israel bombed the international airport in Beirut, is that not a state area you hasbara stooge.

Mystic, Israel hit the runways to make sure not a single Iranian plane would land. Airport buildings were intact.

and here we have the loser @ex-fpm justifying the Israeli aggression on Lebanon. btw, Hezb still gaining more and more influence and votes.

If you cowards lived in Lebanon, your IP would be traced and you would be arrested by now.

not only 'equals'... Lebanon is Hizbullah.

Israelis are such cry babies. The whole world has to sympathize with them 24/24.

What is Hasbara ? Sound Persian or Afghani to me

I don't think they make bats big enough for my head.