Yemenis Fall Deeper into Poverty on Eve of Ramadan 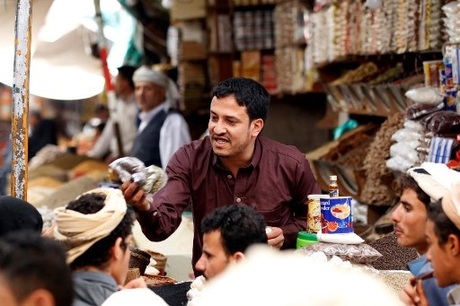 Marketplaces in Yemen's rebel-held capital Sanaa were stacked with produce on the eve of the holy month of Ramadan, but there were barely any customers with the means to buy.

Prices have spiked over the course of Yemen's conflict, which since 2015 has pitted a Saudi-led coalition against the Iran-backed Huthi rebels and seen the country's largest port reduced to a wasteland under de facto blockade.

Millions of Yemenis are living on the edge of famine in what the United Nations calls the world's gravest humanitarian disaster.

During Ramadan, the breaking of the fast at sunset is a sacred tradition, which usually begins with dates.

But in the bustling Sanaa souk, date vendor Ali Saleh said there were few customers stopping by his stall -- stacked high with the traditional sweet.

"Turnover is not very good because of the cut of paying salaries. Also people are not keen in having dates anymore because they focus on the basic needs."

"People are giving priority to the bare necessities," he told AFP.

Yemen's conflict has left nearly 10,000 people dead, tens of thousands wounded, and led to outbreaks of cholera and diphtheria.

For the people of Sanaa, the deprivation during the day throughout Ramadan is not in question, but rather the traditional feast in the evening.

In the heart of Sanaa's old city, the wartime prices are out of reach for most of the inhabitants.

"The prices ahead of Ramadan are very high and don't match with what people are making, especially those with ration cards," lamented Abdullah Mofaddel, a resident of the capital.

Unable to pay the salaries of many civil servants, the rebel administration has distributed ration cards instead so people can buy basic necessities.

"The employees aren't getting salaries. People don't have money to spend. They should at least be paying salaries for Ramadan," said Mofaddel, referring to the Huthis.

In front of a stall, another resident echoed his complaint.

"The situation is very bad. Wages haven't been paid in eight months. We're in God's hands. Everything's getting more expensive by the day," said Ahmed al-Oqabi.

Residents say truckers transporting food are extorted at checkpoints belonging to the rebels and government forces alike, and the cost gets tacked on before the food reaches the markets.

The price of a 40-kilogram (90-pound) sack of rice has risen by a third in the past few days alone, while a 50-kg bag of sugar has gone up 25 percent, Sanaa residents told AFP.

For war widow Jeta al-Sabri, Ramadan has arrived with new worries over how she will provide for her four daughters.

"I sold my gas cylinder to pay the rent, and now I can't cook anymore," said Sabri, referring to the cylinders used across the Middle East to power stoves.

"I have no more flour, no more rice. There's nothing in the house. All I have is my four girls, nothing more," she said, her children sitting across from her in a mostly bare room.

The little girls, giggling and smiling, sat on the tile floor, sharing a piece of Arabic bread and dipping it in coffee for flavor.

Sabri lost her husband in Taez, a large city in Yemen's southwest besieged by Huthi rebels on the outskirts -- and by competing anti-rebel forces inside the city itself.

Sabri escaped to Sanaa, where she depends on meager social security and irregular assistance to survive.

"People can't get by," she said as her girls played, their life belongings stacked in boxes against the wall.

Ramadan is traditionally a period of piety and prayer -- and even truces between warring parties in the Muslim world.

But the war in Yemen shows no signs of abating this holy month.