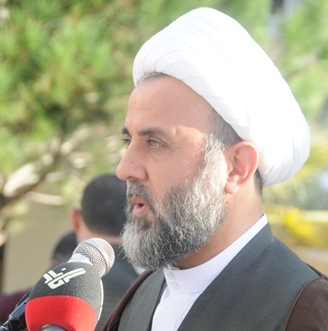 A senior Hizbullah official on Sunday accused Saudi Arabia of seeking to keep his group out of the new Lebanese government.

"Saudi Arabia's declared and undeclared wish is to see Hizbullah outside the new Lebanese government, but the coming days will prove that the Saudi regime is weaker than being able to prevent Hizbullah from joining the government with proactive ministers," Hizbullah Central Council member Sheikh Nabil Qaouq said.

He stressed that "Lebanon is not the right arena for Saudi Arabia to achieve gains at the expense of the resistance," adding that "the Lebanese arena will remain immune to Saudi diktats and orders."

The Hizbullah official also charged that "the same as Saudi Arabia interfered in the parliamentary elections, today it is involved in efforts to form a parliamentary front aimed at confronting and besieging the resistance in order to weaken it and exhaust it."

and they obviously confided in this iranian POS and told him what they want.

but you said they kidnapped him and took his family hostage?

and thank god the Saudis do not form the Lebanese government, unlike the Syrians and Iranians.

Qaouq, The Lebanese People don't want your terrorist organization included into the government, parliament, or any other entity in Lebanon. So please stop living in denial and trying to make the world think that the Lebanese People want or like you or your terrorism-sponsoring party. We do NOT. It's not that the Saudi's don't want you. Lebanon doesn't want you. And since when does your so-called resistance demanded a role in the government?? Bunch of Hypocrates!