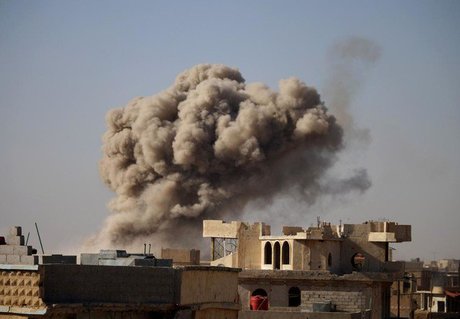 Syria's government ramped up its bombardment of the southern city of Daraa on Monday, forcing dozens of families to flee an expected assault on the cradle of a seven-year uprising.

After a string of wins elsewhere in the country, President Bashar al-Assad has set his sights on recapturing the country's strategic south, which borders Jordan and the Israeli-occupied Golan Heights.

His forces have been battering rebel-held towns in Daraa province for nearly a week, leaving at least 28 civilians dead, according to the Syrian Observatory for Human Rights.

They then turned to the provincial capital of the same name, launching air strikes and barrel bombs on opposition-held districts in the early hours of Monday.

More than 55 surface-to-surface missiles slammed into those neighborhoods after midnight, followed by four barrel bombs, the Britain-based Observatory said.

"It is the first time they drop barrel bombs on Daraa city in more than a year," said monitor chief Rami Abdel Rahman.

The city was struck again around noon, this time with air strikes by Syria's ally Russia, which has helped Assad's troops recapture swathes of territory since 2015.

The attacks prompted dozens of terrified families to stream out of Daraa city.

Many set out in the dead of night to seek shelter in olive groves on the city limits, AFP's correspondent there said.

Leaving on foot or by motorbike, they took refuge in small shacks or tents among the trees.

"We don't know what happened. We were sleeping with the children when all of a sudden, we heard heavy shelling," said Ahmad al-Musalima, 31.

"The kids started shaking in fear," he said.

He and his family fled overnight, joining an estimated 20,000 people displaced by the past week's escalating violence, according to the Observatory.

"We left the house and didn't know where to go. We headed towards the plain with the kids crying and heavy shelling overhead," Musalima told AFP.

Syrian rebels hold the western half of Daraa city and most of the surrounding province, as well most of the adjacent governorate of Quneitra to the west.

That territory roughly forms a horseshoe, whose bottom curve borders Jordan and includes a military base held by rebels since 2014.

Syrian troops meanwhile hold Daraa city's eastern half and nearly all the adjacent province of Sweida.

Frontlines had been relatively quiet for nearly a year under a "de-escalation" deal agreed in July 2017 by Russia, the U.S., and Jordan.

But now, the regime and its Russian allies are pursuing a divide-and-conquer strategy against rebels.

On Monday, Russian bombing raids hit the military base near the border with Jordan, said the Observatory.

Ousting rebels from it would divide the opposition horseshoe into a western and eastern section.

The heavy strikes on Daraa's eastern countryside forced rescue workers to stop operations in the town of Al-Laja.

"The civil defence teams have not been able to reach targeted areas because of the intense bombing," the local civil defense center said in an online statement.

The United Nations has warned that the renewed hostilities could put 750,000 lives at risk and urged all sides to respect last year's de-escalation agreement.

"Any humanitarian crisis in south Syria must be averted first by sparing civilians the pains of fighting, and second, be responded to swiftly from inside and outside Syria," said Ali al-Zaatari, U.N. humanitarian coordinator in Syria.

Jordan said on Sunday it could not absorb a new wave of refugees across its border.

In an effort to avoid a bloody onslaught, Russia is leading negotiations with Syria, Jordan, Israel, and the U.S. in a bid to reach a settlement.

The uptick in violence could be tied to those talks, said Sam Heller of the International Crisis Group.

"It seems the air strikes have two aims: exerting pressure in order to get negotiations, either international or local, and paving the way for a wider attack in case the negotiations don't make progress," he told AFP.

Although it had a key role in the original de-escalation deal, Washington has yet to put its political or military weight behind a solution for the south, he said.

"The Americans haven't gotten seriously involved in the talks over the south, and they're not expected to intervene militarily," Heller said.

i dont think it's actual "barrels", more like barrel-shaped maybe.. and the "barrel bomb" name was coined by rebels for added mediatic effect"

Last time you also checked "there were no Hezbollah members in Yemen, Iraq, or Syria"

but there was no buffer zone between your syrian army and Israel from 1967 -2015?

Do you still tear up like I do when you remember sayidna al hussain, do you?

First, I want to thank you Southern for being 'Patriotic' to your country.

Second, I must thank you for opening up my and the readers' eyes who are whining about Assad's use of barrel bombs. Your ability to explain complex situations in a manner that is undeniably simple and effective is nothing short of genius.

Because of you, I have seen myself grow to be who I am today and for this I am grateful.

Please, keep posting those gems of yours. The world is listening!