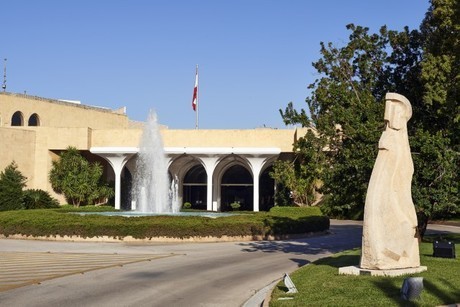 Lebanon condemned the latest Israeli law defining Israel as a “nation state of Jewish people,” as the law provoked fears it could lead to blatant discrimination against Arab citizens.

President Michel Aoun condemned the Israeli move and warned against the threat of “resettlement. “

He said the move is “a new Israeli aggression against the Palestinian people and their right to self-determination, an independent state with Jerusalem as its capital, and the restoration of all its territory.

“It is a flagrant violation of the UN resolutions that affirmed the right of return for the Palestinians, foremost of which is Resolution 194,” said Aoun.

For his part, Speaker Nabih Berri described the move as “another chapter of the ongoing aggression against Palestine and its people and their legitimate right to return and establish an independent state with holy Jerusalem as its capital.”

Lebanon’s Foreign Ministry warned of the repercussions and stressed “on the sacred right of Palestinian refugees in Lebanon and neighboring countries to return to their homeland.

“The Israeli decision carries serious dimensions that require the Lebanese to adopt a unified position transcending all political differences. Israel may be planning for aggressive decisions against the Palestinian people that may reach to the expulsion of Palestinians who hold Israeli citizenship and are non-Jews. The resolution also closes the door for Palestinian refugees to return to the city of Jerusalem,” the Free Patriotic Movement said.

Hizbullah party described it as a “racist decision” warning of the consequences, but at the same time said “the Palestinian people are capable of transforming it into a victory.”

"We are saddened by the weakness of the Arab and Islamic position and by the preoccupation of some Arabs with absurd wars against the free people of this country, while they are competing for the victory of the enemy and for achieving its interests," said a Hizbullah statement.

Al-Mustaqbal Movement considered the Knesset's decision as "dangerous" and adding to the “Israeli enemy's long record of reviving the concepts of racism, isolationism and extremism.”

The Movement called on the United Nations to “fulfill its historic responsibilities to realize the right to the Palestinian cause and put an end to Israeli aggression.”

Israel's parliament on Thursday adopted the law defining the country as the nation state of the Jewish people.

Arab lawmakers and Palestinians called the law "racist" and said it legalised "apartheid" following a tumultuous debate in parliament.

Others said it neglects to specify equality and Israel's democratic character, implying that the country's Jewish nature comes first.

The European Union expressed concern and called for the rights of minorities to be respected.

The legislation, adopted by 62 votes to 55, makes Hebrew the country's national language and defines the establishment of Jewish communities as being in the national interest.