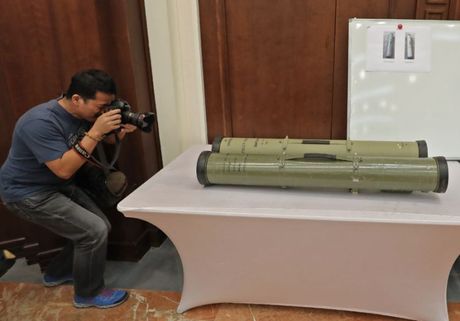 Yemen's Huthi rebels are still arming themselves with ballistic missiles and drones that "show characteristics similar" to Iranian-made weapons, a report by a UN panel of experts has found.

In a confidential report to the Security Council, a copy of which was seen by AFP on Monday, the panel said it "continues to believe" that short-range ballistic missiles and other weaponry were transferred from Iran to Yemen after an arms embargo was imposed in 2015.

Iran has repeatedly denied that it is arming the Huthis in Yemen, but the United States and Saudi Arabia have accused Tehran of providing military support to the rebels.

Recent inspections of weaponry including missiles and unmanned aerial vehicles (UAVs) used by the Huthis "show characteristics similar to weapons systems known to be produced in the Islamic Republic of Iran," said the 125-page report.

During recent visits to Saudi Arabia, the panel was able to inspect debris from 10 missiles and found markings that suggest an Iranian origin, said the report spanning January to July this year.

"It seems that despite the targeted arms embargo, the Huthis continue to have access to ballistic missiles and UAVs to continue and possibly intensify their campaign against targets in KSA (Saudi Arabia)," said the report.

The panel said there was a "high probability" that the missiles were manufactured outside of Yemen, shipped in sections to the country and re-assembled by the Huthis.

- Iran denies backing Huthis -In a letter to the panel, Iran maintained that the missiles, which the Huthis have dubbed the Burkan, are a domestic upgrade of SCUD missiles that were part of Yemen's arsenal before the start of the war.

The experts are also investigating information that the Huthis received from Iran a monthly donation of fuel valued at $30 million. Iran has denied providing any financial support to the Huthis.

During the inspections of the missile debris, the experts mandated by the council also found power converters produced by a Japanese company and Cyrillic markings on components that suggested a Russian link.

The investigation of those findings continues.

UN Secretary-General Antonio Guterres told the council in a separate report in June that some components from five missiles fired at Saudi Arabia were manufactured in Iran but that UN officials were unable to determine when they were shipped to Yemen.

The panel has opened an investigation of seven airstrikes by the Saudi-led coalition that hit civilian buildings, a gas station and commercial vessels, in a possible violation of international humanitarian law.

The Huthis are accused of widespread and indiscriminate use of landmines.

Since 2015, Saudi Arabia has been leading a military campaign to push back the Huthis and restore the internationally recognized government to power.

The conflict has left nearly 10,000 people dead in Yemen, which the United Nations considers the world's worst humanitarian crisis.

This panel is quick to accuse the Saudi military. Where is there any evidence that anybody in any way linked to KSA has ever done anything unkind to anybody in or near or from or related to Yemen? Those KSA airforce jets might very well be Iranian jets disguised using their famous Shia mind-control techniques to make the jets appear to be dropping UK-sourced cluster bombs on Yemeni civilians as a way to deflect attention from Iranian involvement in the production of missiles in previous decades. And when AFP says "internationally recognized", it is not referring to Libya. Rather it is, and in just the same way. There are equal and balanced governments in both Yemen and Libya according to international recognition protocols under development by an internationally recognized panel.

The munitions in the photo here are of Mk. 9 Anti-Truth weapons deployed by Iranian proxies in Syria, Lebanon, and Yemen to make it appear that racism is not a good thing for all involved. The UN Council On Preserving Racism As Constitutive of Good Order and Discipline Among the Lower Races deplored the use of the weapons as "tantamount to saying there is something unhygienic about keeping the higher races separated from the lower races, when hygiene is precisely the objective of such separation". "Only when the higher races are protected from grotesque and ill-judged criticism can they maintain order among and between the various lower races." The council was enjoying a recent ski holiday in Switzerland, where all skiing was performed by English surrogates for safety and diversity.