Saudi Arabia Says It's Given $100 Million to Northeast Syria 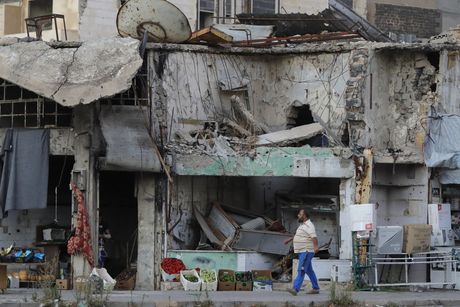 Saudi Arabia said early on Friday that it has contributed $100 million to northeast Syria for "stabilization projects" in areas once held by the Islamic State group and now controlled by U.S.-backed forces.

The Saudi Embassy in Washington said the money "will save lives, help facilitate the return of displaced Syrians and help ensure that ISIS cannot reemerge to threaten Syria, its neighbors, or plan attacks against the international community." ISIS is an alternate acronym for the militant group.

The money will go toward agriculture, education, roadworks, rubble removal and water service for the region, which is now largely held by the U.S.-backed Syrian Democratic Forces.

"This substantial contribution will play a critical role in the coalition's efforts to revitalize communities, such as Raqqa, that have been devastated by ISIS terrorists," the embassy said in a statement.

The Syrian city of Raqqa was the seat of the Islamic State group's self-proclaimed "caliphate" until it was liberated by the U.S.-backed forces last year.

The Kurdish-led Syrian Democratic Council is the political wing of the Syrian Democratic Forces. In May, Syrian President Bashar Assad threatened to attack areas held by the U.S.-backed forces. Saudi Arabia long has opposed Assad's government, funding and arming rebels who challenged his rule as the country's 2011 Arab Spring protests devolved into a civil war and then a regional proxy battlefield.

The U.S. military operates air bases and outposts in the Kurdish-administered region.

The Saudi Embassy described the $100 million as part of a pledge made by Foreign Minister Adel al-Jubeir during a U.S.-sponsored conference in Brussels about the Islamic State group in July at NATO headquarters.

in other word and as always the kingdom of Bani Saud gives $100 Million to ISIS and U.S.-backed forces, both are the same.

The Kurds and ISIS are the same? Are you on drugs, child? Dude, you really don't need to test the merchandise e v e r y time!!!