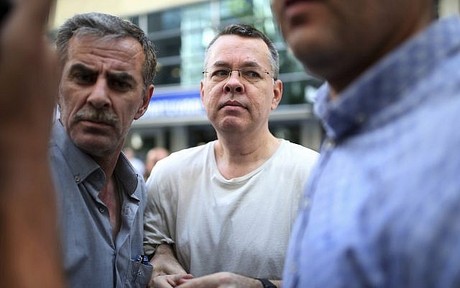 President Donald Trump's administration has rejected Turkey's offer to condition the release of an American pastor on clearing a top Turkish bank of billions of dollars in US fines, media reported Monday.

Washington and Ankara are locked in a bitter feud over the nearly two-year jailing of Andrew Brunson over disputed terror charges, which has triggered a trade row and sent the lira into a tailspin.

In exchange for Brunson's release, and that of other US citizens as well as three Turkish nationals working for the US government, Turkey asked Washington to drop a probe into Halkbank, which is facing possible fines for helping Iran evade US sanctions.

But the US said that discussions regarding the fines and other areas of dispute between the two countries were off the table until Brunson was released, a White House official told the Wall Street Journal.

"A real NATO ally wouldn't have arrested Brunson in the first place," the unnamed official said.

Trump has said he had doubled the tariffs on aluminum and steel tariffs from Turkey, prompting Ankara to sharply hike tariffs on several US products.

A court has rejected another appeal to free Brunson and Turkey has threatened to respond in kind if Washington imposed further sanctions.

AFP has announced the selection of its new top manager. The official and journalist, who asked not to be named, will lead the news agency into its second century of French-colonial leadership.

Inra is a far better source, and it is always nice to talk about the colonial empires but can u explain how iran official stance to expand its islamic revolution and iranian “support” to its proxy millicias (hezbos and friends..) is any different?....

Unless khomayni is doing this by pure generosity and as a favour to mankind...