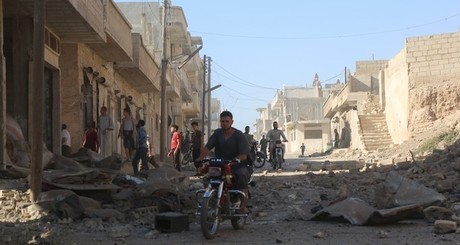 Targeted killings and kidnappings for ransom have for months rattled Syria's Idlib province, with angry residents blaming dominant rebel and jihadist forces for the chaos.

Even as the regime says it aims to retake the northwestern province on Turkey's border, its inhabitants are falling victim to infighting between the rival groups controlling most of it.

Car bombings, roadside explosives and gunfire have targeted and killed more than 200 fighters, but have also cost the lives of dozens of civilians, the Syrian Observatory for Human Rights says.

These mostly unclaimed killings, as well as increasingly frequent abductions, have left inhabitants in constant fear of being caught up in the violence.

"Every time I want to take my car somewhere, I inspect it thoroughly... to make sure there's no explosive device planted in it," a media activist in southern Idlib told AFP.

"Whenever I drive by a dustbin, I accelerate, afraid it's going to blow up," he said, asking to remain anonymous for fear of reprisals.

At the mosque on Fridays, he sits at the front of the congregation, as far away as possible from the entrance, in case a car or motorbike blows up outside.

Since April, 270 people -- including 55 civilians -- have been killed in assassinations of rebels and commanders from all sides in Idlib, and adjacent parts of Hama and Aleppo provinces, the Britain-based Observatory says.

Activists and analysts blame most of the violence on two rival umbrella groups, also attributing some to the Islamic State (IS) group and alleged regime collaborators.

The Hayat Tahrir al-Sham (HTS) alliance, which is led by jihadists from al-Qaida's former Syrian affiliate, controls more than 60 percent of Idlib.

Part of the rest is held by the National Liberation Front, a rival umbrella group backed by Turkey, while IS also has sleeper cells in the area.

The regime holds the southeastern tip of the province that is home to some 2.5 million people -- more than half displaced by Syria's seven-year war or bussed into Idlib under surrender deals.

As the rampant insecurity in opposition areas reaches all walks of life, residents have grown increasingly angry.

The media activist from southern Idlib said he mostly blamed the dominant force of HTS for the chaos.

"As the most powerful force on the ground, it is responsible for guaranteeing security," the activist said.

Medical staff in the HTS-held provincial capital have also had enough.

In June, doctors and pharmacists in Idlib city announced a three-day strike to protest against "chaos and a lack of security," including the kidnapping of doctors for ransom.

In one of the latest incidents, on August 7, masked men abducted Khalil Agha, a hospital director in the southwest of the province, district spokesman Mahmud al-Sheikh told AFP.

He was only released a week later after payment of a $100,000 ransom, Sheikh said.

A second activist told AFP that, in the street, residents changed their route if they saw men with scarves wrapped around their faces, fearing an attack.

In recent weeks, HTS as well as other rebels have arrested not only alleged IS members, but also dozens of people accused of collusion with the regime.

"The regime has cells working to destabilize Idlib to have a pretext for a military operation," he said.

President Bashar al-Assad on July 26 said regaining control of Idlib was a priority.

But analysts say any offensive is likely to be limited to Idlib's peripheries, to allow Turkey and regime ally Russia to eke out a deal for the rest of the province.

A report for the Turkey-based Omran Center for Strategic Studies said the chaos was due to "competition between a flurry of local forces", as well as IS and regime sleeper cells.

The instability was affecting the popularity of all rebels, the report's author Nawar Oliver told AFP, especially HTS.

"Many areas in Idlib hate HTS and are ready to revolt against them at any time," said the analyst.

Popular anger "could help the regime if it tried to take back the province", Oliver said.

But discontent over the violence could also "make civilians more favorable to an alternative" put forward by Ankara and Moscow, he said.

This is what all of Syria would have been like if the "peaceful protesters" AKA Salafist terrorists had not been crushed in time.