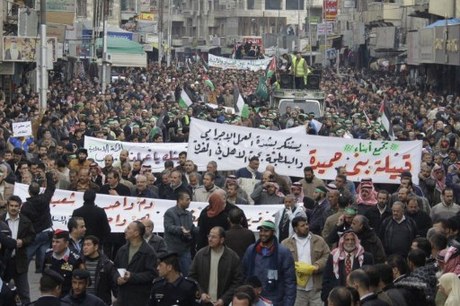 Thousands of Islamist opposition supporters demonstrated Friday in Amman to demand reform, a week after the movement's offices in a northern city were torched during clashes with loyalists.

Chanting "enough is enough," around 7,000 people, including Islamists, youths and tribesmen, marched from Al-Husseini mosque in central Amman to the nearby city hall, an Agence France Presse correspondent said.

Carrying a large national flag, they called for "reforming the regime" and fighting corruption, rejecting "intimidation and bullying."

"The Muslim Brotherhood will not give up demands for reforms. We will not give in to the corrupt and those who are against reform," Rheil Gharaibeh, the movement's spokesman, told the crowds.

Last Friday, opposition Islamist demonstrators and government loyalists clashed in the northern city of Mafraq, where dozens, including police, were wounded and shops were destroyed.

The government has said it was investigating the clashes, during which the offices of the Islamic Action Front, the Muslim Brotherhood's political arm, were torched.

The Islamists have called for arresting the attackers, accusing security services of backing them.

Pro-reform demonstrations were also held in other Jordanian cities, including Irbid and Salt in the north as well as Karak in the south.

Islamists, youth groups and other parties have been protesting since January, demanding political and economic change and an end to corruption.