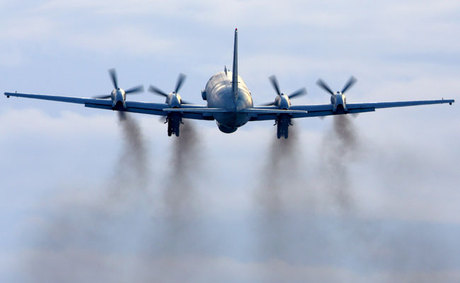 Syria accidentally shot down a Russian military aircraft, killing all 15 crew members, when its air defenses swung into action against an Israeli missile strike, Russian and Israeli forces said Tuesday.

The incident late Monday was the most deadly known case of friendly fire between Syria and its key backer Russia since Moscow's game-changing 2015 military intervention.

Russian President Vladimir Putin said it was the result of "tragic accidental circumstances."

The Russian Ilyushin plane dropped off the radar over the Mediterranean moments after Turkey and Russia announced a deal that offered millions of people reprieve from a threatened military assault in northern Syria's Idlib province.

There was no immediate word from Damascus, but the deadly chain of events started when Israeli missiles struck the coastal region of Latakia on Monday.

Israel said it had targeted a Syrian military facility where weapons manufacturing systems were "about to be transferred on behalf of Iran" to Lebanon's Hizbullah.

It sees Iran's military presence in Syria as a threat, and Prime Minister Benjamin Netanyahu told Putin by phone on Tuesday his forces would keep acting against it.

"Israel is determined to stop Iranian military entrenchment in Syria, and the attempts by Iran, which calls for the destruction of Israel, to transfer to Hizbullah lethal weaponry (to be used) against Israel," Netanyahu said, according to his office.

Israel expressed "sorrow" for the Russian deaths, but insisted the Russian plane had been felled by "extensive and inaccurate Syrian anti-aircraft (surface-to-air missile) fire."

The plane, downed by Syria's Russian-made S-200 air defense system, had a crew of 15 who were all killed, Moscow said.

The Russian military accused Israeli pilots of using "the Russian plane as a cover, exposing it to fire from Syrian air defenses."

Israel denied the accusations, saying its jets were already back in Israeli airspace when Syrian forces launched the missiles that hit the Russian plane.

Russia stressed the incident would have no impact on the fledgling Idlib deal, but warned Israel of reprisals and summoned its envoy in Moscow.

However, Putin rejected any comparison with Turkey's downing of a Russian jet in 2015.

"It rather looks like a chain of tragic accidental circumstances," he told reporters. "An Israeli jet did not shoot down our plane."

U.S. Secretary of State Mike Pompeo said also expressed "sorrow" over the Russian deaths, and said it showed "the danger of tragic miscalculation in Syria's crowded theater of operations."

The Syrian Observatory for Human Rights said some missiles, suspected to be Israeli, did get through the Syrian defenses and struck ammunition depots at the site of the technical industries institute.

Rami Abdel Rahman, the head of the Britain-based monitoring group, said at least two fighters were killed and 10 wounded in the strike.

Israel has conducted frequent raids in recent months against Syria's military infrastructure, including against bases it believes host Iranian combatants.

Earlier in September, Israel admitted carrying out 200 strikes in Syria over the past 18 months.

The Syrian blunder came hot on the heels of a major deal announced by Putin and his Turkish counterpart Recep Tayyip Erdogan after talks in the Russian resort town of Sochi.

The two key actors agreed to create a demilitarized zone, 15-20 kilometers (9-12 miles) wide, along the line of contact between rebels and regime troops in the Idlib region.

That would be implemented by October 15 and would entail a withdrawal of all jihadist fighters from the area.

The demilitarized zone will be secured with the help of "mobile patrol groups of Turkish contingents and contingents of Russian military police," Putin said.

By the end of the year, transport routes between the key port of Latakia and Aleppo as well as Latakia and the major city of Hama must be restored, he added.

Iran, the third member of the so-called Astana process aimed at ending Syria's seven-year war, praised the deal as an example of "responsible diplomacy."

United Nations Secretary General Antonio Guterres said the accord should avert an all-out military assault on the rebel stronghold and "provide reprieve for millions of civilians."

The European Union said it expected it to protect "civilian lives and infrastructure as well as guarantee unhindered and sustainable humanitarian access."

Damascus, which has regained swathes of territory thanks to deadly Russian-backed offensives in recent months, welcomed the Sochi agreement.

But the deal was met with distrust by some of the three million Syrians living in the Idlib region.

"The decision that came out was just a partial one. It doesn't solve the Syrian people's problem," said Wassim Sweid, one of hundreds of protesters who gathered in the rebel-held town of Binnish.

"In my opinion, this agreement will not put a stop to the shelling."

The U.N. had warned a fully-fledged ground assault could spark the worst humanitarian catastrophe yet in a conflict that has killed more than 360,000 people.

I doubt it was shot down by Syrian obsolete air defenses. The plane vanished from radar screens 35 kms off the coast of Syria way beyond the range of air defenses. Most probably it went down due to malfunction which is common in russian transport planes.

the important thing is it went down with 15 war criminals on board.

The S-200 has a range of 300km. So this would not be a stretch. The Russians have been supplying the Syrian regime with this missile since the 80s and the Russian Ilyushin Il-20 is an old aircraft defenseless to even old SAM and similar types of missiles. The Russians should be questioning the incompetence of their Syrian allies and the efficacy of their own missile controlling radars for mistaking a large propeller driven aircraft for a jet fighter. That said, I would not discount the possibility of this being a Syrian message to Russia. If so expect a high ranking Syrian regime official to mysteriously meet a violent end.

Who will bomb Idlib now???

“southern….. 9 minutes ago
who cares!
the hell is waiting.”

It couldn't have happened to nicer and more deserving people.

This dreck comment wasn't worthy of being posted twice.

Lol, an Iranian cheerleader complaining about cheering and coming from the guy who feels the need to include the word “Salafist” in every single comment.
Every. Single. Comment.

I have the utmost respect and deepest admiration for Mrs. gigahabib because it has the ability to see.