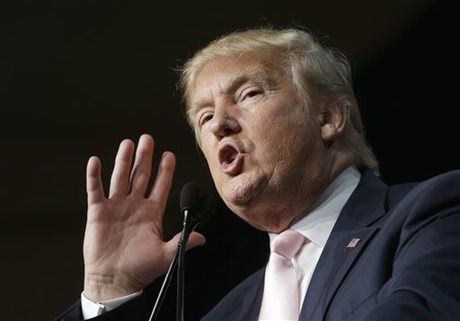 U.S. President Donald Trump promised federal aid and "100 percent" support as he arrived in North Carolina on Wednesday to tour areas of the eastern state pummeled by Hurricane Florence.

"Some of the flooding is actually epic," Trump said at a news conference after landing in Air Force One at Marine Corps Air Station Cherry Point on North Carolina's Neuse River.

"We've seen all the pictures where houses are literally covered beyond the roof," he added.

He pledged federal assistance as North Carolina begins the recovery from a storm estimated to have caused billions of dollars in damage and left dozens dead.

"Whatever we have to do at the federal level we'll be there," Trump said. "We will be there 100 percent."

The president offered his condolences for the nearly 40 people killed by the storm.

"America grieves with you and our hearts break for you... We will never forget your loss, we will never leave your side. We are with you all the way," he said.

North Carolina Governor Roy Cooper said his state took a "gut punch" from Florence, which made landfall on the coast as a Category 1 hurricane on Friday and drenched some parts of the state with 40 inches (one meter) of rain.

"Our people are still reeling... Our rivers are still cresting and there is still danger for some people," he added.

Cooper said farmers in the state had suffered significant losses to crops, while major roads remained flooded and thousands of people were still without power.

"A lot of businesses are down and, of course, people have lost their homes," he added.

"We have weathered storms before in our state but we have never seen one like this," Cooper went on. "It has been epic, disastrous and widespread. It is a storm like no other."

The governor told Trump the state could "come back stronger than ever" but would need the president's help.

"We've got a long road ahead in the days, months and even years ahead to make sure we build back to where we need to be in North Carolina," he said.

Following the news conference Trump joined the governor handing out meals in styrofoam containers to North Carolina residents and asking how they were doing.

The president is scheduled to tour neighboring South Carolina before returning to Washington.

He asked a state official during his briefing at the Marine Corps base how a region of North Carolina called Lake Norman had been impacted.

The Trump National Golf Club is located on the shores of Lake Norman.

NBA legend Michael Jordan, a North Carolina native, announced meanwhile he was donating $2 million to help with recovery efforts from the hurricane.

Jordan, who owns the National Basketball Association's Charlotte Hornets, grew up in Wilmington, near where Florence made landfall.

"Wilmington truly is my home," the former Chicago Bulls star added. "When it's home, that's tough to swallow."