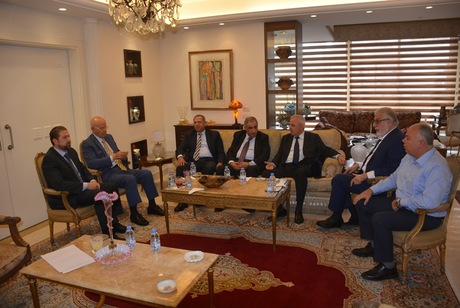 The Consultative Sunni Gathering refused suggestions to allocate a ministerial portfolio to a Sunni figure not belonging to their group, as efforts continue to resolve the government formation delay, al-Joumhouria daily reported on Friday.

The so-called independent Sunni MPs comprised of six lawmakers, said they “insist” one of them be represented, arguing that the “height of popularity” was given to all six of them.

Foreign Minister Jebran Bassil has reportedly carried a proposal from President Michel Aoun to Prime Minister-designate Saad Hariri on naming a Sunni minister not provocative to Hariri from the President's share in a bid to solve the new hurdle.

After six-month of delay, the new cabinet was on the verge of formation early this week after the Lebanese Forces accepted the portfolios that were assigned to it but a last-minute hurdle over the representation of the so-called independent Sunni MPs has surfaced.

aoun's opposed to this block because he worries a similar block could be formed made up of christian mps start demanding a seat from his or bassil's share. they only need to point out to all the times aoun complained about the president's shares and insisted he shouldn't be given any