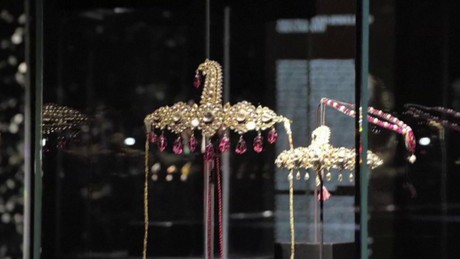 A Serbian and four Croatian nationals have been arrested for stealing millions of dollars of jewellery in Venice that belongs to the Qatari royal family, the Croatian interior ministry said Thursday.

Thieves got away with earrings and a brooch on the final day of a four-month exhibition in January, showcasing hundreds of Indian gems from the last five centuries.

One of the Croatians arrested is linked to several major jewellery heists in different European countries, the ministry said.

The suspect is wanted in Switzerland over an eight million Swiss franc (seven million euros) diamond robbery from a jewellery event in Basel in March 2011.

The Croatian suspects -- aged between 43 and 60 -- were arrested on Wednesday close to the capital Zagreb and in the northwestern Istria peninsula, close to Italy, a ministry statement said.

The Serb, the fifth member of the gang, was held at a crossing on the Serbia border on Thursday, it added.

The ministry said the value of the stolen earrings was $1 million and the brooch was worth more than $2 million.

Entitled Treasures of the Mughals and the Maharajahs, the jewelry belonged to the Al Thani collection, which is owned by the Qatari royal family.

Italian investigators said in January that two thieves had managed to take the items from a reinforced display case after deactivating the alarm system before disappearing into the crowd and escaping.

The alarm was raised only several hours later.