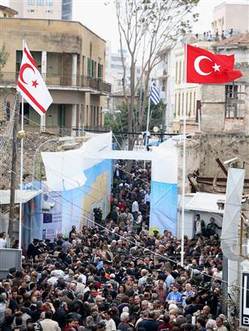 Dozens of people from the island's Greek Cypriot south streamed across the eastern Dherynia border post, walking past United Nations peacekeepers into the breakaway Turkish-backed north.

At the same time, the Lefka or Aplici crossing opened in the northwest of the Mediterranean island.