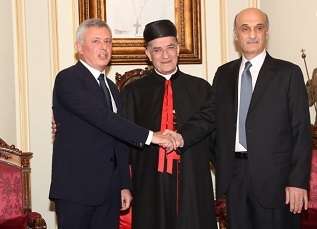 The meeting was sponsored by Maronite Patriarch Beshara al-Rahi and held in the presence of a large number of officials from the two parties.

“We cannot think of comprehensive national unity unless Maronites are part of this unity,” the patriarch added.

“I have always been against two-party, three-party and four-party alliance, seeing as we are with all the people and all state institutions,” al-Rahi went on to say.

A statement issued by Bkirki and the two parties after the meeting said the reconciliation “stems from a will to shoulder the historic responsibility and from concern over the fate” of the country and its Christian community.

“It has nothing to do with ‘political bazars’ and does not seek to make any change to the scene of the current political alliances in Lebanon and the North,” the statement said.

It also noted that as “each party holds onto its political beliefs and principles” they will seek to “lay the foundations for a permanent dialogue.”

Speaking to reporters after the meeting, Geagea described the move as a “white, beautiful and historic day.”

Franjieh for his part said the meeting was “Christian par excellence.”

“We did not tackle the daily details but rather the sentimental values and we are opening a new chapter but not at anyone’s expense,” he added.

Asked whether a “reconciliation” with the Free Patriotic Movement will follow, Franjieh said: “We don’t have a rift with the FPM and when the President invites us to Baabda we are ready.”

Al-Rahi had announced prior to the meeting Bkirki is "against two-party, three-party and four-party alliances."

"We are with the entire people," he added.