Alain Aoun: Hariri Must Admit March 8 Has Right to Get Additional Minister 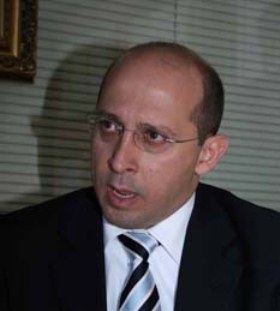 MP Alain Aoun of the Strong Lebanon bloc has called for resolving the current government deadlock through a solution based on having “no victors and no losers.”

“The obstacle today is that Prime Minister-designate Saad Hariri must admit that the representation of the March 8 camp has grown bigger and that it has the right to get an additional minister. The (March 8) camp must also contribute to the solution by naming a minister who would represent a solution to the crisis. If this theory is not implemented, we will stay where we are,” Aoun warned in a TV interview.

“The Shiite duo cannot be bypassed in the formation process after they voiced support for the independent Consultative Gathering,” the MP noted.

He added: “If we put aside March 8's mistake of delaying the announcement of its representation demands and the delay in the formation of the Consultative Gathering, the March 8 camp has grown bigger and it has the right to get an additional minister.”

The Sunnis MPs outside Mustakbal have already been given a seat, so they are represented. The top vote-getter among the ten non Mustakbal independent Sunnis is getting that seat and he's not one of the six. Four of the six in the pretend block are part of blocks that are already represented. The other two are not the top vote getter, it's their bad luck. Do you want them to be given a seat they don't deserve, I thought you believed in fairness.

The way things are going, the only solution for Lebanons political crisis is for every single Member of Parliament to become a Minister.