Swiss Poised to Reject Bid to Save Cow Horns 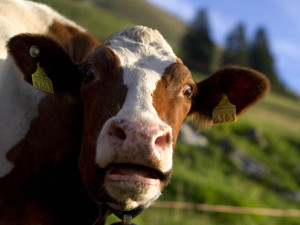 The third measure on the ballot, a rightwing proposal that would have given Swiss judges supremacy over world courts, was also headed for defeat, according to provisional results released by the GFS Bern polling and research firm.

The poll is part of Switzerland's famous direct democracy system, in which voters cast ballots on national issues four times a year.

The cow horn initiative was launched by livestock farmer Armin Capaul, who captured widespread media attention after he secured the more than 100,000 signatures needed to force a vote in an upstart campaign that began with few resources and no political support.

The proposal did not call for a ban on dehorning but sought a constitutional amendment that would have created incentives for farmers to let horns grow.

Capaul said his campaign was inspired by conversations with his herd in him home of Perrefitte, a municipality in the heart of the Jura mountain range.

Environmental and animal rights groups ultimately joined Capaul's effort but it was opposed by the government, which argued farmers had to remain free to manage their livestock as they saw fit.

Provisional results from GFS Bern said the proposal was likely to be rejected, with 54 percent voting against.

Voters were, however, poised to approve a measure in which the government sought consent for legal revisions passed in March that outline the type surveillance insurance companies can use to expose potential fraudsters.

Insurers in the wealthy Alpine nation had long spied on customers they suspected of making false claims, but that came to a stop following a 2016 ruling by the European Court of Human Rights, which said unregulated spying amounted to a violation of privacy.

The government insists that surveillance is necessary to curb insurance fraud and in turn keep costs low for all.

"What the Swiss wanted to show was that the social safety net is important, but that (for it to work) we all have to be absolutely responsible," Benjamin Roduit of the centre-right Christian Democratic Party told public broadcaster RTS.

Critics argued that the measures were hastily written under pressure from the insurance company lobby and do not explicitly prohibit serious, unjustified invasions of privacy.

Legal analysts have noted that the law does not prohibit insurers, or the detectives they hire, from recording or filming someone who is on their private balcony or in their garden, provided those areas are visible from a public space.

But the government and business groups were staunchly opposed, warning that hundreds of trade deals vital to the Swiss economy as well as the country's reputation would have been threatened by a formal repudiation of international courts.

"It is a huge defeat," SVP vice president Celine Amaudruz told RTS after just 33 percent of voters supported the proposal, according to provisional results.