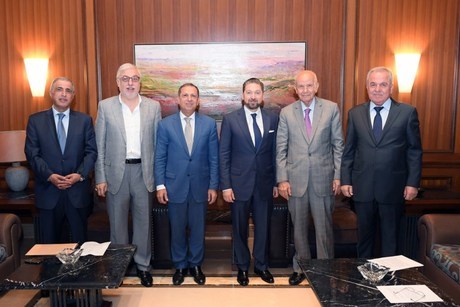 Pro-Hizbullah Sunni MPs said they are giving Prime Minister-designate Saad Hariri 48 hours to set a date to meet with them, adamantly stressing their right to be represented in the government, al-Joumhouria daily reported on Monday.

“We are giving Hariri 48 hours to set a date and meet us. Any meeting after that deadline is meaningless,” one of the six so-called Independent Sunni MPs told the daily without being named.

However he said “nothing new has emerged regarding their demands for representation in the government.”

After holding separate parliamentary consultations with Hariri, each as part of his own bloc, the six MPs decided to form a separate bloc.

The new government was on the verge of formation on October 29 after the Lebanese Forces accepted the portfolios that were assigned to it but a last-minute hurdle over the representation of the pro-Hizbullah Sunni MPs surfaced.

or what? These people who do not even form a block are making threats now? Disgusting...

sorry to disappoint you they formed a gathering not a block

yaaa The Muppet show is back..

"After holding separate parliamentary consultations with Hariri, each as part of his own bloc, the six MPs decided to form a separate bloc."

but the illiterate low life above cannot read or comprehend.

Yes genius! Three are from Amal, one from Hezbollah, two from Marada, but they form their own bloc. And this sounds logical and normal, and acceptable?? So what does that mean? They are dissidents? They created a new curent? They are thugs manipulated by Ebola! ? Emm... yes... they are!