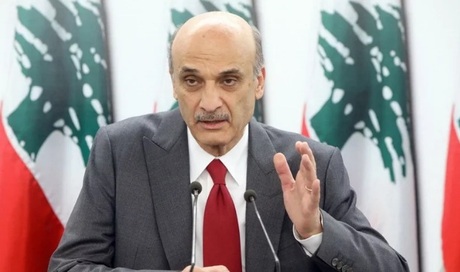 Lebanese Forces leader Samir Geagea has called on President Michel Aoun and Prime Minister-designate Saad Hariri to form a government without Hizbullah should the party continue refusing to hand the PM-designate the names of its three Shiite ministers.

“Any political party has the right to have a viewpoint about the formation process, but that should not be more than a mere viewpoint. President Aoun and PM-designate Hariri have the right to endorse or reject this viewpoint. The party concerned can also grant or withhold its confidence from the formed government. This is the constitution and this is democracy,” Geagea said in an interview with the Central News Agency.

“But no party can say, ‘You either do what we want or there won’t be a government,’ and this is what Hizbullah is doing today,” the LF leader added.

Warning that the economic and social situations “cannot withstand further confusion,” Geagea said Aoun and Hariri “must take a decision” in light of their “constitutional responsibility.”

“They must tell Hizbullah, ‘We want you in the government, give us the names of your ministers, and you have the right to voice your opinion on the issue of representing the independent Sunnis with a minister’… or else they should form a de facto government should the party refuse to hand the names,” Geagea added.

The new government was on the verge of formation on October 29 after the Lebanese Forces accepted the portfolios that were assigned to it but a last-minute hurdle over the representation of pro-Hizbullah Sunni MPs surfaced.

lol @ the 'Christian' shia from the West

The Zionist mouthpiece speaks. Not sure why he even has a voice.

won't happen. both aoun and hariri are too afraid

So irrelevant that you tried to kill him like you killed Pierre Gemayel and countless other "irrelevant" politicians who happened to oppose you.

It is about time to put an end to the hegemony of hizbollah that is keeping the state a hostage with their assisinations and arms. Yes keep them out until they regret not providing their three names. This is not a charity event it's called come play ball with me otherwise I will play ball with someone else. In plain English you snooze you loose.

He is more Lebanese than you will ever be ya heretic.