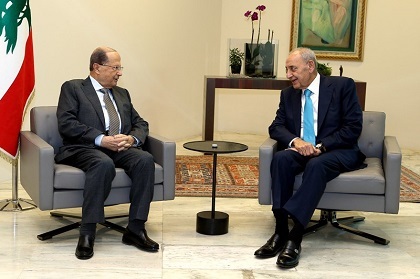 Media reports said the meetings follow an urgent invitation from Aoun and are aimed at exploring means to break the government formation deadlock.

“President Aoun is the one who invited Berri to the Baabda meeting and he is expected to meet with other figures after his meeting with the parliament speaker,” LBCI television said.

Hariri was also expected to arrive in Baabda according to the TV network and the president is launching “an initiative to resolve the Sunni obstacle after the failure of Free Patriotic Movement chief Jebran Bassil’s proposals,” LBCI added.