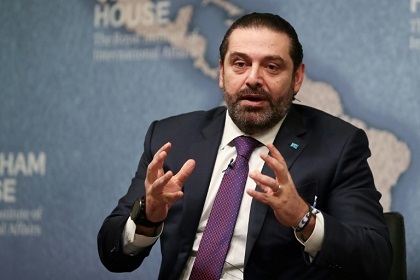 Prime minister-designate, Saad Hariri, said Thursday he is "pretty sure" that a six-month-old deadlock on forming a government will be broken by the end of the year.

He was speaking at London's Chatham House think-tank, seven months after parliamentary elections were held.

"I am pretty sure by the end of the year we will have a government," he said.

"We are getting there. It is not a regional issue, it is an internal issue... There is still one obstacle and I am sure we will be able to resolve it," he said.

A deal between political leaders has seemed close on several occasions, but they have repeatedly failed to reach full agreement on a line-up.

Hariri attempted to strike a reassuring tone, despite warnings from some of Lebanon's closest allies that donor patience was running thin.

"We can do business in Lebanon even with a caretaker government," he said.

Lebanon's economy has often looked on the brink of collapse, but a Paris conference dubbed CEDRE in April 2018 earned it $11 billion in aid pledges.

France last week warned that Lebanon risked heavy losses if the unprecedented solidarity expressed by donors was to fizzle out.

"The lack of a government in Lebanon means running the risk that this dynamic in the international community is lost," said France's ambassador to Lebanon, Bruno Foucher.

"That moment could pass," he said. "There are other countries that may need international assistance."