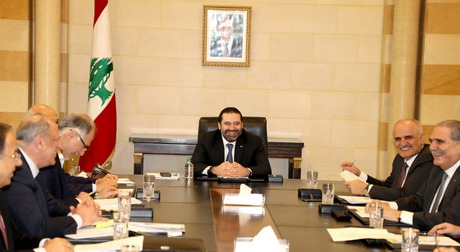 “The meeting protracted with the aim of finalizing the biggest part of the draft policy statement and most essential articles were completed,” Jarrah said after the meeting, adding that the discussions will resume at 2:00 pm Tuesday.

“The meeting's atmosphere was very positive and the debate was objective and aimed at strengthening the foundations of this statement in order for it to be clear, direct and responsible,” the minister added, noting that the statement could be finalized on Tuesday.

Asked whether the meeting witnessed disputes, Jarrah said “not at all, especially regarding the sectoral, productive and economic issues in addition to the electricity file and the issue of lowering the budget's deficit.”

As for the so-called army-people-resistance equation, the minister said “the issue was resolved in the previous policy statement,” adding that he believes that the “same text” will be adopted.

Asked whether the war of words between Prime Minister Saad Hariri, Progressive Socialist Party leader Walid Jumblat and Free Patriotic Movement chief Jebran Bassil had affected the meeting's atmosphere, the minister said “what happened yesterday remained outside the doors of the meeting's room.”

Jarrah also noted that the meeting witnessed a “discussion and not a dispute” over the controversial electricity file.

The discussions revolved around “endorsing practical and quick plans and associated measures,” he said.