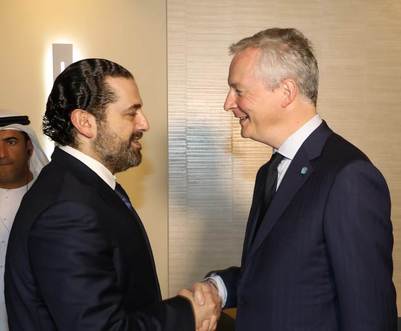 French Finance Minister Bruno Le Maire on Sunday reassured Prime Minister Saad Hariri during a meeting in Dubai that Paris is committed to pay what it had pledged at the CEDRE economic conference.

“We discussed the means to implement the reforms in Lebanon and I wanted to stress to PM Hariri that France fully supports the implementation of these reforms,” Le Maire said after the meeting.

He also said that Paris is committed to dispensing the funds that were agreed on during the CEDRE conference.

“France is here today to make sure that Lebanon will benefit in a good way from this aid and that it will endorse the reforms that it had committed itself to,” the minister added.