Bassil Meets Mogherini: 'Resistance Not Terrorism Even if Entire World Says So' 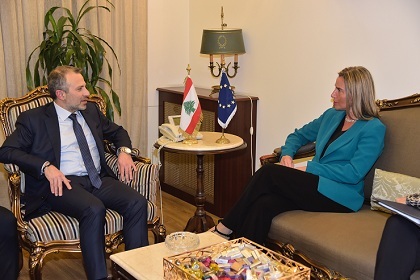 “Hizbullah's terror designation by Britain will not have a negative impact on Lebanon, and it is something we have become used to from the other states,” Bassil said after the meeting.

“Britain has informed Lebanon of its keenness on bilateral relations,” he added.

“As long as the land is occupied, the resistance will remain embraced by state institutions and all Lebanese people,” the minister added.

Separately, Bassil said a “safe and dignified repatriation of Syrian refugees is the only solution,” noting that the European Union will help Lebanon in this regard.

Bassil threw a dinner banquet in Mogherini's honor after the talks.

Earlier in the day, Britain said it will ban the political wing of Hizbullah, making membership of the movement or inviting support for it a crime.

“As long as the land is occupied, the resistance will remain embraced by state institutions and all Lebanese people,” Bassil added.

and what has the 'resistance' done to liberate 'occupied' land? NOTHING!

Instead its fighting Arab regimes at the request of Iran.

How many Lebanese does Bassil represent?

September 12, 2002
Pat Robertson: General Aoun, delighted to have you with us on The 700 Club, welcome. Tell me about Hezbollah. We hear about the terrorist group Hezbollah. What relation do they have to Syria?

General Michel Aoun: Hezbollah is not a separate entity from Syria. It is under the Syrian operational control.

Pat Robertson: The so-called terrorist group is under the operational control of Syria?

General Michel Aoun: Yes, 100 percent, no question about that.

Hezbollah has taken over, with the help of Lebanon's opportunist and corrupt political class, the duties and functions of the Lebanese army. Instead of liberating allegedly occupied land through resistance, the terror group now says it is here to defend Lebanon from Israeli 'aggression; a duty entrusted solely to the Lebanese armed forces under the constitution.

Do not speak for me imbassil!
I am Lebanese... and I see Ebolas as Terrorists... and i am not the only one...