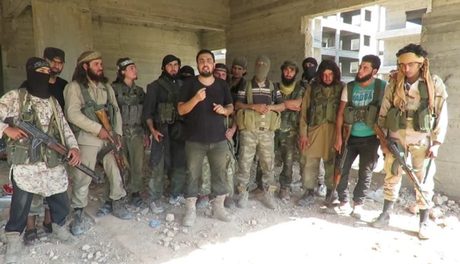 A Syrian jihadist group linked to al-Qaida killed 21 regime and allied forces Sunday near Idlib province, in one of the deadliest breaches of a six-month-old truce deal, a monitor said.

"At dawn, 21 fighters from the regime forces or allied militia were killed in an attack by Ansar al-Tawhid jihadists," the Syrian Observatory for Human Rights said.

Ansar al-Tawhid has ties to the larger Hurras al-Deen group, which is also active in the area. Both are considered semi-officials franchises of al-Qaida in Syria.

The area of Idlib and small parts of the adjacent provinces of Hama and Aleppo are mostly controlled by the rival Hayat Tahrir al-Sham organization.

HTS is led by fighters who formerly belonged to al-Qaida's ex-affiliate in Syria.

Sunday's deadly attack was carried out against regime positions in the village of Masasna, in the north of Hama province, the Observatory said.

"It was one of the highest casualty figures among regime ranks since the Putin-Erdogan deal," Abdel Rahman said.

He was referring to an agreement reached in the Russian resort of Sochi between Russian President Vladimir Putin and his Turkish counterpart Recep Tayyip Erdogan.

Under the September 17 deal, Turkey was supposed to exert its influence over anti-regime groups in the Idlib region to get them to pull back their fighters and heavy weapons from a demilitariZed zone.

The agreement was meant to stave off a planned offensive by the regime and its Russian backers that aid groups feared could spark the eight-year-old Syrian conflict's worst humanitarian crisis yet.

The government assault on the last major bastion of forces opposed to President Bashar al-Assad's rule has indeed been held off but the deal's provisions have not been implemented and the de facto truce looks shakier than ever.

Since the Sochi agreement, HTS has consolidated its grip on the Idlib province and Turkey appears to be in no position to deliver on its commitment.

Breaches of the demilitarized zone have spiked in recent days. Another 20 regime and allied forces were killed in three days of clashes about a week ago.