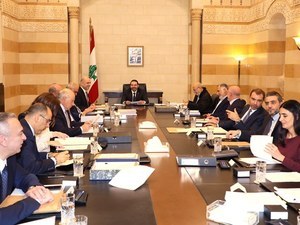 Lebanon’s government is pursuing an austerity policy which is crystallizing in the budget of 2019, not yet approved by the government, and includes “spending control” as part of a reform policy required by the CEDRE conference for Lebanon, Asharq al-Awsat newspaper reported on Wednesday.

The government is expected to discuss the budget in order to approve it and refer it to parliament before May 31, in parallel with "the government's determination to implement a package of reforms aimed at not only reviving the Lebanese economy but also fortifying it,” according to Interior Minister Raya el-Hassan.

It is clear that the electricity sector will be the main destination for reducing government expenditures, along with other sectors most notably government contributions to public sector employees, in addition to a plan to increase revenues through the activation of tax collection, said the daily.

Quoting unnamed sources, the daily added that each parliamentary bloc holds several files for the need to control expenditure. These proposals will be discussed by the parliamentary Finance and Budget Committee when the government refers the new budget to the Parliament.

Prime Minister Saad Hariri noted last week that “difficult decisions related to the budget and reforms will be taken,” urging “all political factions to shoulder their responsibility.”

Political sources told the newspaper that among the proposals to cut spending are the “compensations for deputies, reduction of travel expenses for public sector employees, overtime allowances in state departments, fuel vouchers for officers in the military and security sectors, reducing staff at embassies and diplomatic missions abroad, and reducing allocations to charitable organizations.”

In addition to the plan to activate collection, control the border, combating smuggling and tax evasion, the sources said that “among the proposals are reduction in school scholarships for public sector employees.”

Yes we know that the customs suffer from corruption... this is today Ebola's main source of revenues... let's see how you will deal with that! On may 8th when you tried to fire their Airport manager, they invaded Beirut with the Black shirts...