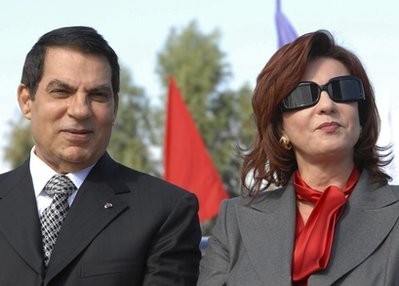 The aircraft was seized at Le Bourget airport near Paris, where it had been parked in a hangar for a week, the sources said. It belongs to the Mabrouk family, one of whose members is Ben Ali's son-in-law.

The move came a day after Europe's foreign ministers agreed to freeze the assets of Ben Ali and his wife Leila Trabelsi in response to a request from the Tunisian authorities.

Several dozen associates of the deposed leader, listed by the new authorities in Tunis, may face similar sanctions in the following days, diplomatic sources said.

Tunisia's former leading couple and their inner circle are suspected of having pocketed much of the country's wealth over years and of taking personal stakes in much of the economy.

Last week French state prosecutors said they had opened an investigation into the Paris real estate assets of the ousted strongman after three activist groups filed a civil suit against him.

They accuse Ben Ali, who fled who fled on January 14 after his people revolted, of corruption, misusing public funds, and money-laundering during his 23-year rule.

The French daily Liberation last Monday published a front-page photo of a townhouse in the posh 16th arrondissement of Paris that it said belonged to one of the ex-president's daughters.

It published other photos of prime real estate assets in Paris it said belonged to the entourage of Ben Ali, who has sought refuge in Saudi Arabia since being forced out of office last month by a popular revolt.(AFP)