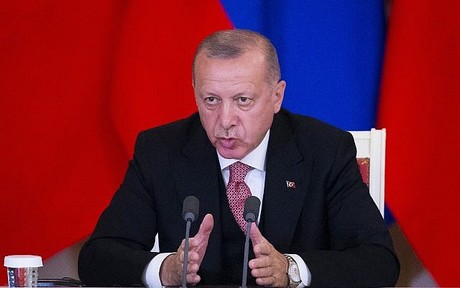 Erdogan's ruling Justice and Development Party (AKP) was dealt an upset on March 31 when the party lost the capital Ankara to the opposition as well as Istanbul, the country's largest city.

The gap narrowed after the AKP had nulled votes counted again. The party on Tuesday said it would ask election authorities for a re-run of the Istanbul race.

Pointing to irregularities involving ballot box chiefs, Erdogan said if officials "had a sincere attitude, this would lead to cancellation", Hurriyet daily reported.

He told Turkish journalists that there were individuals from different professions including the military rather than civil servants serving as ballot box chiefs.

"Our colleagues have confirmed this. Of course all this casts doubt," he said after a visit to Moscow on Monday where he held talks with Russian President Vladimir Putin.

Both the AKP and CHP have said there is a difference of around 14,000 votes in the opposition's favour in Istanbul.

Erdogan on Monday said there was "theft at the ballot box" and said "organised crimes" had been carried out during the election.

Can you imagine the "impartiality" if the military served as ballot box chiefs. I'd bet that the opposition candidate wouldn't get a single vote.