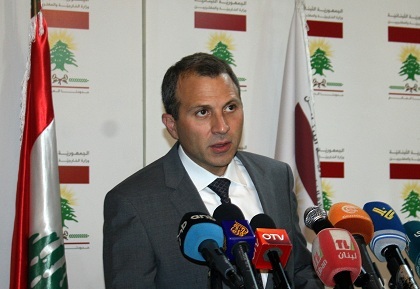 The top diplomats of Lebanon and neighboring island nation Cyprus said Thursday they were working together towards a deal over adjacent oil and gas exploration zones in the Mediterranean.

Both countries hope to exploit resources on either side of their shared maritime border, and Lebanon this month opened tenders for three of its four blocks along that frontier.

Foreign Minister Jebran Bassil said "an oil and gas deal" was in the works.

"We agreed to... set a first date on May 7 to compare points of agreement and any points of contention," he said at a press conference in Beirut with his visiting Cypriot counterpart.

"The second stage will be in June with a summit for a finer evaluation," Bassil added.

"We will try in September to have finished a sharing agreement over the issue of oil so that it can be the start of talks for a deal between both governments," he said.

That deal would be "on borders... and all installations that can be shared to transport and export all that is related to oil and gas," he said.

An exploratory well is expected to start work on the Cypriot side of the border next year, making the bilateral deal pressing, he said.

"We agreed to initiate discussions on a bilateral framework agreement concerning the development (of) hydrocarbons resources which cross the median line between our exclusive economic zones," said the minister of Greek Cyprus.

Such an agreement would provide "the much-needed legal certainty for international companies wishing to invest in the region's huge hydrocarbons potential," he said.

Cyprus has discovered two natural gas reserves in its waters, and hopes to begin exporting gas -- and maybe oil -- by 2022.

Turkey, which backs a breakaway proto-state in the northern third of the island, has claimed it also has rights to energy exploration off the coast of the divided island.

Last year, Lebanon signed its first contract to drill for oil and gas off its coast.

A consortium comprising energy giants Total, ENI and Novatek took the first two of its ten blocks, including one disputed by neighboring Israel, with which Lebanon has fought several wars.

Two more of the blocks now up for tender are also adjacent to Israel's waters.