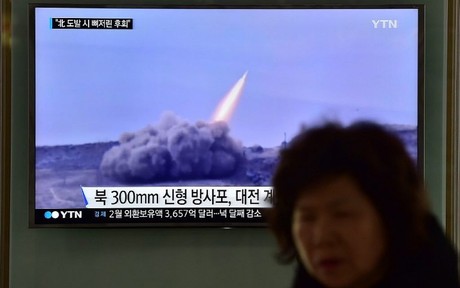 North Korea launched unidentified projectiles into the sea Saturday, the South Korean military said, in what could be Pyongyang's first short-range missile launch for more than a year as it seeks to up pressure on Washington with nuclear talks deadlocked.

The United States and North Korea have been at loggerheads since the collapse of a summit between Kim Jong Un and Donald Trump in February, where the two sides clashed over sanctions and the extent of Pyongyang's concessions on its atomic arsenal.

North Korea "fired a number of short-range projectiles from its Hodo peninsula near the east coast town of Wonsan to the northeastern direction from 9:06 am (0006 GMT) to 09:27 am today", the South's Joint Chiefs of Staff said in a statement.

The projectiles travelled from 70 to 200 kilometres (45 to 125 miles) towards the East Sea, also known as the Sea of Japan, the JCS added.

In an earlier statement, it had said Pyongyang had launched an unidentified short-range missile.

The last North Korean missile launch was in November 2017.

That issue was also at the centre of the February talks in Hanoi, where North Korea demanded immediate sanctions relief, but the two sides disagreed on what Pyongyang should give up in return.

Earlier this week, North Korean Vice Foreign Minister Choe Son Hui warned Washington of an "unwanted outcome" if it did not adjust its stance on economic sanctions.

North Korea did not carry out any missile or nuclear tests last year, as Kim held his first historic summits with the leaders of the United States and South Korea.

"North Korea historically did not generally test anything while talks were on with the US. Talks are not on."

The White House said it was "aware of North Korea's actions tonight".

"We will continue to monitor as necessary," Press Secretary Sarah Sanders said in a statement.

Japan's defence ministry, meanwhile, said there was "no confirmation of ballistic missiles" entering its territory.

Hodo Peninsula, where Saturday's firing took place, has been used as a training area for "live-fire testing, training exercises for artillery and coastal defence cruise missiles" since the 1960s, according to the respected 38 North website.

It wasn't until the mid-1990s that a "formal training area" was established in the region, and Hodo has been "increasingly used for ballistic missile and long-range artillery rocket testing" during the last 10 years, it added.

Since the collapse of the Hanoi summit between Kim and Trump, South Korean president Moon Jae-in -- who brokered the first meeting between the mercurial leaders -- has tried to salvage diplomacy, but Pyongyang has remained largely unresponsive.

Kim slammed the South in a speech to his country's rubber-stamp legislature last month, saying it should not "pose as a meddlesome 'mediator'" between the US and Pyongyang.

Last week, on the anniversary of the Panmunjom summit between Moon and Kim, Pyongyang's state media KCNA said Washington and Seoul "keep pushing the situation of the Korean peninsula and the region to an undesirable phase", criticising their joint military exercises.

Kim Ki-ho, a former colonel in Seoul's army, said a missile that can fly 200 kilometres from the North could have heavy consequences for those living in the South.

"Such a weapon can affect those in Seoul, and even those who live in Daejeon, located in the central region of South Korea," he said.

Pyongyang also said last month that it had test-fired a new type of "tactical guided weapon," saying the test was "conducted in various modes of firing at different targets."

It gave no details of the weapon at the time.

"Chairman Kim has decided to remind the world -- and specifically the United States -- that his weapons capabilities are growing by the day," said Harry J. Kazianis, Director of Korean Studies at the Center for the National Interest.

"My fear is that we are at the beginning stages of a slide back to the days of nuclear war threats and personal insults, a dangerous cycle of spiking tensions that must be avoided at all costs."