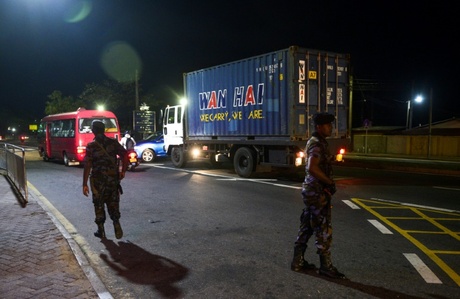 A Sri Lankan province north of the capital was under indefinite curfew Tuesday after the first death in anti-Muslim riots in the wake of the Easter terror attacks, police said.

A nationwide night curfew was relaxed in all areas except the North-Western Province (NWP) where a Muslim man was killed by a mob on Monday, police said, in a violent backlash against last month's bombings.

The 45-year-old died of injuries sustained when a crowd stormed his carpentry workshop in the Puttalam district in the NWP and slashed him, official sources said.

Elsewhere in the province, mobs torched dozens of Muslim-owned shops, vandalised homes and mosques in a day of rioting.

"The curfew in the NWP will be continued until further notice," spokesman Ruwan Gunasekera said. "Security forces are assisting police who have been ordered to use maximum force to contain the violence."

Police said they fired in the air and used tear gas at several places to deter people attempting to attack mosques.

In the adjoining district of Gampaha, mobs smashed Muslim-owned restaurants and at least one garment factory, official sources and residents said.

In an address to the nation on Monday night, Prime Minister Ranil Wickremesinghe said a countrywide curfew was declared to prevent unidentified groups orchestrating communal violence.

"Police and security forces have contained the situation, but these (unidentified) groups are still trying to create trouble."

In a separate TV address, police chief Chandana Wickramaratne warned of stern action against rioters, and said that constables have been issued orders to use maximum force.

A state of emergency has been in place since the bombings -- which the Islamic State group claims to have helped -- and security forces have been given sweeping powers to detain suspects.

The latest wave of unrest started when a mob targeted Muslim-owned shops in the town of Chilaw, 80 kilometres (50 miles) north of Colombo, on Sunday in anger at a Facebook post by a shopkeeper.

Muslims make up around 10 percent of Buddhist-majority Sri Lanka's population and Christians about 7.6 percent.