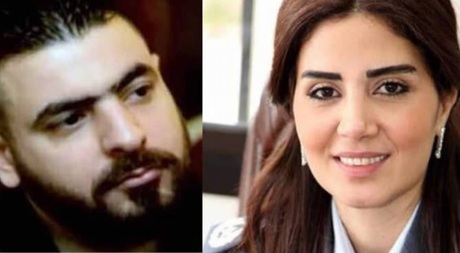 The Military Court on Thursday acquitted Internal Security Forces Lt. Col. Suzanne al-Hajj and sentenced the hacker Elie Ghabash to a year in prison in the case of “fabricating a spying for Israel case for theater actor Ziad Itani.”

The court, however, sentenced Hajj to two months in jail -- which can be substituted by a LBP 200,000 fine -- on charges of "withholding information."

In an unusual move, State Commissioner to the Military Court Judge Peter Germanos attended the session in person and made an intervention.

Germanos first spoke about the circumstances in which Itani was arrested by the State Security agency, noting that “the arrest was in line with the law” and detailing how the actor “confessed to an offense he did not commit.”

“The State Security agency had been monitoring Itani after he posted two tweets: one after the arrest of the (filmmaker) Ziad Doueiri and another in which he expressed his non-opposition to normalization with Israel,” Germanos added.

Germanos meanwhile revealed that Ghabash had fabricated five spying for Israel cases for other individuals and that he had “financial gain objectives” and used to do work for security agencies to that end.

As for Lt. Col. Hajj, Germanos called for her acquittal, noting that Ghabash had come up with the Itani case idea, raising it first with the State Security agency and later with Hajj.

“There are no elements proving Hajj's interference in the offense, because she did not give Ghabash money and was not aware of the preparations to fabricate a spying case for the actor Itani,” Germanos explained, adding that “in the worst case, we can say that she stood idly by.”

He accordingly asked the court to hand Ghabash the “severest penalties” and to clear Hajj of any charges.

Ghabash's lawyer Jihad Lutfi said his client did not commit an offense seeing as “there is no crime without a legal text.”

He also noted that Itani “confessed to collaborating with the Israelis through a woman named Colette” and that “the confession was made without coercion.”

Hajj's lawyer Rashid Derbas meanwhile said that “all technical evidence prove that our client was later informed that a case was being prepared against Ziad Itani and had no prior knowledge of the issue.”

“She did not do any activity and she did not help in the file,” he added.

Itani was released in March 2018 after spending 109 days in detention.

He shot to prominence in recent years because of a series of comedy plays on Beirut, its customs and the transformations it has undergone in recent decades.

The works -- particularly "Beirut Tariq al-Jedideh", which refers to a majority-Sunni neighborhood of the city -- have been very well-received.

Before becoming an actor, Itani worked as a journalist with Lebanon-based Al-Mayadeen television and with various regional newspapers.

"he expressed his non-opposition to normalization with Israel"
in this case this guy bellow should be stripped of his immunity, arrested, thrown in jail and beaten till he confesses as per the usual:
https://www.youtube.com/watch?v=_ohoREr6CGE

This summarizes the state of Lebanon from top to bottom. Germanos was implicated by the Intelligence Branch of the ISF for receiving bribes. He lashed out by suing the head of the ISF. Justice in Lebanon is non existent never was never will be. Suzanne Hajj is an evil corrupt person who used her position to destroy people's lives. She got away with it and she was rewarded by the corrupt system for her evil deeds.

lol sure. Ghabash the hacker was the one who had a beef with Itani and not susan al hajj. Makes sense!

what a banana republic

Itani spent 109 days in jail and he was tortured and his reputation ruined. She pays L.L 200,000 for setting him up.