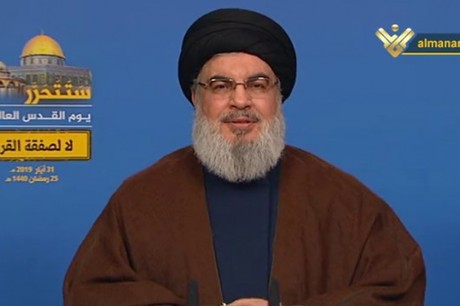 Hizbullah chief Sayyed Hassan Nasrallah warned on Friday that if there was a war against Iran the whole Middle East region would "erupt," amid escalating U.S.-Iranian tensions.

U.S. President Donald "Trump, his administration, and his intelligence know well that any war on Iran will not remain confined to Iran's borders," Nasrallah said.

"Any war on Iran will mean the whole region will erupt," said the head of the Iran-backed movement in a televised speech marking Quds Day, explaining that such a war was therefore unlikely.

"And any American forces and American interests will be permissible" as a target, he said.

Hizbullah is listed as a "terrorist group" by the United States, and has fought several wars with U.S ally Israel.

Nasrallah on Friday also slammed a proposed U.S. peace deal to end the Israeli-Palestinian conflict that Trump has dubbed "the deal of the century".

"It's a void deal... a historic crime," he said of the plan, that has already been rejected by the Palestinians as it is expected to largely favor Israel.

"This deal is a loss of Palestinian, Arab, and Islamic rights," Nasrallah said.

Nasrallah also rejected what he called U.S. conditions for mediating a border and maritime dispute with Israel.

He said that Washington is "using the talks" to discuss, and even make threats over, degrading his group's capabilities, bringing up an Israeli claim that Hizbullah has precision missile factories.

Nasrallah acknowledged his group has the weapons but denied it produces them.

"We have precision missiles in Lebanon, and enough to be able to change the face of the region," he said.

"So far in Lebanon there are no factories for precision missiles," he added.

Nasrallah threatened for the first time, however, that Hizbullah could consider setting up such factories if Washington continues to use the talks on border demarcation to discuss his group's capabilities.

A U.S. official has been shuttling between Israel and Lebanon, technically still at war, to settle the dispute. Washington considers Hizbullah a terrorist group.

Nasrallah said he is supportive of the Lebanese government's positions in the talks.

"My problem is allowing such discussion (of Hizbullah's capabilities)" he said. "This door must be closed."

Moreover, Nasrallah boasted that "today the axis of resistance is stronger than ever, contrary to what some are claiming."

He also said that the Lebanese delegation's stance at Mecca's emergency Arab Summit is "rejected and condemned," noting that "it does not conform to the government's policy statement or dissociation policy."

Addressing the summit, Prime Minister Saad Hariri condemned what he called "continuous attempts to infiltrate the Arab societies," in reference to Iran.

Nassrallah also said that the Lebanese delegation's stance at Mecca's emergency Arab Summit is "rejected and condemned," noring that "it does not conform to the government's policy statement or dissociation policy."

This iranian terrorist is talking about the 'dissociation policy'??? What are his terrorists doing in Syria, Iraq, and Yemen?

Then the filthy terrorist says: "Any war on Iran will mean the whole region will erupt," and the dissociation policy no longer applies:)

He is just confirming that he and his followers are pure Iranians.

You are an entitled commentator probably living in the West. Come back to your country and work and pay taxes.

and how did you determine they are Israeli trolls ya iranian POS?!

Iran needs to be destroyed- that will rid the world of cancer that is festering.

So when your terrorist leader clearly says he is not going to stay idle if his bosses in Iran are attacked and real Lebanese who are concerned about their country and their future take exception to his words, they according to you are 'israeli trolls', right ya filth?

and a diseased one too.

Someone will have to explain to me why ALL Ebola members og the Government accepted 1701... and Ebola spits on it today!?
Nasrallah was hiding in the sewer, shitting his pants, and would have signed anything that would stop the Israeli bombing. And now, he parades, provoques, threatens, and his idiot followers acclaim and praise... poor sheep... People like Mastika who would believe anything his leader says, no brain, no knowledge, no conscious, not able to question one's self for a second... sad.