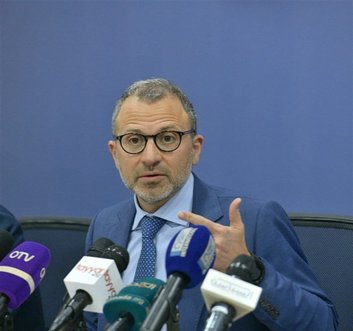 Foreign Minister Jebran Bassil on Saturday reiterated calls for the repatriation of refugees saying it is an innate right for Syrians that need not an international decision to implement.

“The international community is using the issue of repatriation of refugees as a pressure card.

Lebanon is carrying a burden that no other country can bear. Countries hosting refugees are building walls and barriers,” to prevent the entry of refugees said Bassil in remarks at the 3rd Municipalities Conference.

The Minister stressed that the return of displaced is an “innate right” for Syrians and that they do not need an international decision to make them go back to their hometowns.

“More than 600,000 Syrian refugees move back and forth between Lebanon and Syria and these hold refugee cards,” astonishingly noted the Minister, adding that the majority of areas in Syria are safe now and can receive back their populace.

He stressed that Lebanon is keen on the repatriation of Syrian refugees for the benefit of Lebanon and Syria, “the return of refugees is a right of the Syrians and we will not accept distorting our words. Our approach of the Syrian displacement issue is humane and non-sectarian.”

He concluded by saying: “Anyone who accuses us of racism is either a beneficiary or a conspirator.”

Ok, pick up the hotline and call your boss in damascus and have him return the refugees immediately.

If Lebanon had real foreign policy head instead of this Don Quixote, it would have calculated the direct and indirect cost per day of Syrian Refugees and pursued a UN resolution that the total amount will be subtracted from any future aid to rebuild Syria provided by any foreign country and given to Lebanon to repay the cost of hosting the refugees. This will insure a 180 degree turn in Assad criminal policy towards Syrian refugees, suddenly wanting them to return as soon as possible after he destroyed the life of a quarter of his country's population.

yep, every fool sees it clearly.

you couldn't have chosen a better name, fool!

Right of Return.
"By the Rivers of Babylon there we wept as we remembered Zion" "Next year in Jerusalem"
So why are the Arab States demanding right of return for the Palestinians and Syrians in Lebanon and the other neighbouring states, but denying exactly the same rights for the Jews in Israel.