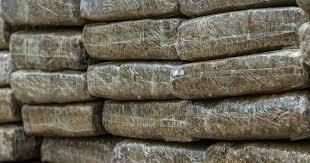 The drugs were discovered Sunday evening at the vast Tanger Med port in three vehicles "believed to be transporting industrial equipment", the General Directorate for National Security said in a statement.

The "record" quantity of resin was found "divided among 16 containers in the trailers of the three trucks," the statement added.

The drivers and their three assistants, all Moroccan, were arrested and taken into police custody.

Tanger Med in northern Morocco is one of Africa's largest ports and is within sight of the Spanish coast.

Morocco is one of the main global producers and exporters of cannabis resin, according to the United Nations Office on Drugs and Crime (UNODC).

Production is concentrated in the north of the country, where some 47,000 hectares of agricultural land were used for cannabis cultivation, according to UNODC statistics from 2016.