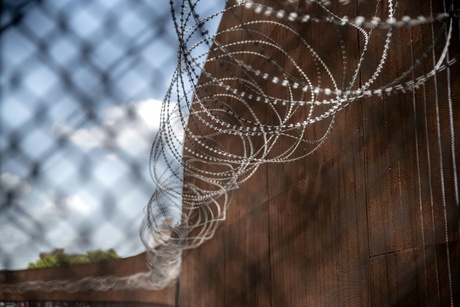 The US Department of Homeland Security requested 1,000 additional soldiers to help manage the migrant crisis in Texas, the Pentagon said Monday, amid growing outcry over conditions in migrant detention facilities.

In a statement, the Pentagon said they had been asked to authorize the Texas National Guard to lend support to Customs and Border Protection (CBP) officials, who say they are overwhelmed by the numbers of refugees crossing the southern US border.

Thousands of active duty and National Guard troops have already been deployed for months along the US-Mexico border to support immigration officials.

"DHS requests authorization for 1,000 Texas National Guard members... to provide supplemental holding and Port of Entry (POE) enforcement support to CBP within the State of Texas," the statement said.

The Guard members will help manage CBP-run holding facilities for single, adult migrants in the towns of Donna, on the eastern end of the border with Mexico, and Tornillo, which is in the middle of the border.

They will also provide support at ports of entry and commercial airports in El Paso and Laredo, in order to improve border security and traffic flow.

While the Pentagon did not specify when they received the request or if they had made a decision, the statement did note that "Texas Governor (Greg) Abbott has consented to the use of the National Guard to support CBP."

The Department of Homeland Security (DHS) has been criticized after a report from its inspector general, a watchdog, last week warned about "dangerous overcrowding" in migrant detention facilities in Texas.

Most single adults had not had a shower in a month and were being given wet wipes. Some detainees were suffering from constipation after a diet consisting only of bologna sandwiches.

The report came a day after a group of Democratic lawmakers toured the detention centers and denounced the conditions as "horrifying."

Representative Alexandria Ocasio-Cortez, who toured two such centers, told reporters the migrants were being subjected to "abuse."

"They put them in a room with no running water and these women were being told by CBP officers to drink out of the toilet," she said upon returning to New York.

CBP deputy commissioner Robert Perez, appearing on CNN, said the detention centers were "never designed to deal with the volume of migrants coming our way" and the Border Patrol is doing its best to deal with "absolutely oversaturated conditions."

According to Border Patrol figures, 223,263 people were detained in the Rio Grande Valley sector between October 2018 and May 2019, up 124 percent from the same period a year earlier.

In April the US Defense Department said it would deploy about 320 additional troops to the southern border, adding to around 2,900 active duty military and 2,000 National Guard members currently posted to the boundary region.