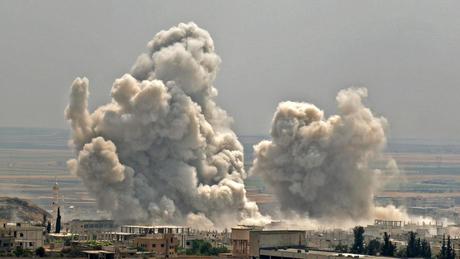 A blast killed four soldiers in southern Syria Wednesday in a rare such deadly attack in the defeated cradle of the eight-year uprising, a war monitor said.

"The explosive device was aimed at a convoy transporting members of the Fourth Division" in the southern province of Daraa, the Syrian Observatory for Human Rights said.

Nine others were also wounded in the attack near Yadud village, some seven kilometres (four miles) outside the provincial capital of Daraa city, the Britain-based monitor said.

It was not immediately clear who was behind the blast, but loyalists in the province face explosions and gunfire on a near daily basis, although they are usually not deadly, it said.

"Previous rebel fighters who call themselves the Popular Resistance usually carry out these types of attacks against the regime," Observatory chief Rami Abdel Rahman said.

Russia-backed government forces last summer retook the province, following a deadly bombardment campaign and surrender deals that saw part of the population board buses to an opposition holdout region in the northwest.

Government institutions have since returned, but army forces have not deployed in all of the province.

And local anger has grown after hundreds were detained despite the so-called "reconciliation deals", and many others forcibly conscripted into President Bashar al-Assad's army.

In March, dozens of people took part in a hasty protest against a statue of the late father of the president being reinstated eight years after protesters demolished it.

The civil war has killed more than 370,000 people since it started with anti-government protests in Damascus and Daraa in March 2011, before their brutal repression triggered conflict.