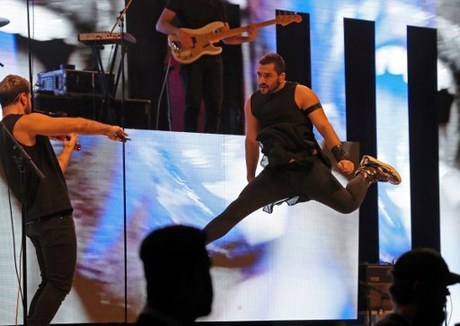 The participation of popular Lebanese rock band Mashrou’ Leila in this year’s edition of the Byblos International Festival has sparked a storm of controversy in the country after the young artists were accused of “insulting Christianity” in their songs.

The band’s supporters and opponents are clashing on social networking websites, amid calls for boycotting and banning the concert. Some users, including Free Patriotic Movement official Naji Hayek, have openly threatened to resort to violence to prevent the gig from taking place.

The Maronite Archbishopric of Byblos has meanwhile issued a statement calling for “barring the Mashrou’ Leila performance on the land of holiness, culture and history,” in reference to the city of Byblos.

“The goals and lyrical content of the band Mashrou’ Leila largely contravene with religious and human values and contain attacks on Christian rituals,” the statement said.

The head of the Catholic Media Center, Father Abdo Abu Kasam, for his part stressed that “the church will not allow any project or concert that insults our religious sanctities.”

“Lebanon is the country of freedoms, but one’s freedom stops at the limit of the other and their respect and dignity,” Abu Kasam added.

The band had been banned from performing in Jordan in 2016 over similar accusations.

The band has toured several Western and Arab countries, including the UAE and Egypt.

In 2017, at least six people were arrested in Egypt after raising the rainbow flag of the lesbian, gay, bisexual and transgender community at Mashrou’ Leila’s concert in Cairo. The band’s lead singer Hamed Sinno is openly homosexual.

With its unique blend of intricate indie rock and enigmatic Arabic poetry, the band has become one of the Middle East's biggest bands.

Sinno's lyrics touch on sexuality but have also tackled the curses of Lebanese politics, materialism and social strife, often with satirical twists.

Mashrou’ Leila began in 2008 as a university jam band at the American University of Beirut and adopted influences from Balkan melodies, American folk music, and mainstream pop.