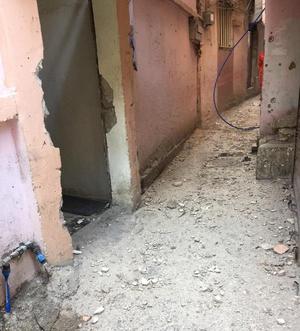 The Palestinian refugee camp of Ain el-Hilweh was on Saturday witnessing cautious calm after a Palestinian "security operation" that ended in the withdrawal of an Islamist group from a camp's neighborhood and the escape of its leader.

Lebanon's National News Agency said the operation was carried out in the al-Ras al-Ahmar neighborhood, the bastion of "Bilal al-Orqoub's group."

NNA said the group is accused of assassinating Hussein Alaeddine, aka Abu Hassan Khomeini, on Friday. The fighting had erupted in the wake of the incident.

"The Palestinian National Security forces managed to seize control of the house of the fugitive Bilal al-Orqoub, amid reports that he fled with his son Youssef to an unknown destination," NNA said.

Several houses were burned during the clashes and other material damage was recordes.

Stray bullets meanwhile reached areas in the camp's vicinity and damaged the glass facade of a bakery in the area.

The heavy fighting had renewed on Saturday morning after a night thay witnessed intermittent shooting.

What a pity, they are killing each other. the more the merrier.