Bassil: Everyone in Lebanon is Hizbullah Partner 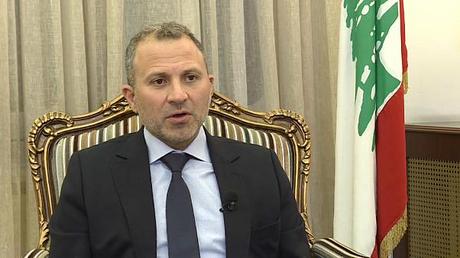 Free Patriotic Movement chief and Foreign Minister Jebran Bassil has noted that “everyone in Lebanon is a partner of Hizbullah,” not only the FPM.

Admitting that his movement’s alliance with the Iran-backed party has been “costly,” Bassil told Euronews: “Our partnership with Hizbullah has been costly at the popular and diplomatic levels, but we have gained Lebanon’s stability and unity, because Hizbullah is a part of a people and not an armed group.”

“This partnership is not limited to the FPM, seeing as everyone in Lebanon is a partner of Hizbullah, as proved by the presence of a national unity government,” Bassil added, pointing out that “we have no other choice but civil war.”

“We can’t accept the classification of Hizbullah as a terrorist organization, as designated by Washington and one can’t compare between Hizbullah and the other groups that entered into the conflict arena in Syria,” the FPM chief went on to say.

Bassil also said that the U.S. sanctions on Hizbullah are harmful to Lebanon and that the Lebanese government is exerting efforts to have them lifted.

Separately, Bassil acknowledged that Lebanon is reeling from a “severe” economic crisis but reassured that “the country is not on the brink of bankruptcy and collapse thanks to an adopted economic plan that has started to yield results through the decrease in the treasury’s deficit.”

WHAT!!!.. Ahhh maaan!.. Looks like our favorite midget in law.. is once again.. indulging in the delightful.. Z3aiter Own™ brownies and baked goods..

"Hizbullah is a part of a people and not an armed group.”

Is Bassil telling the world the terror party is unarmed in Syria, Iraq, Yemen, etc.?

"the_roar: 45 minutes ago
Ladies and Gentlemen: Today you have just listened to the future president of Lebanon. Learn people, learn!"

Bassil is right. Like he says, the alternative is civil war. The clearest way to admit that we are all hostages to this terrorist militia who will kill anyone in their way.. Starting with their fellow lebanese with views other than their own. Its simply a tragic joke how politicians can sit at the same table as the murderers of so many of our politicians, journalist, police officers and servicemen.

With internal fighting like this, each one trying to undermine the unity of the Republic of Lebanon, why does the country keep proclaiming that its main enemy is Israel, whose only claim on the country is to keep peace and quiet along the common border.

Bassil: Everyone in Lebanon is Hizbullah Partner

So they are all accomplices of a terrorist organization and as such should be listed on the terror list and sanctioned.