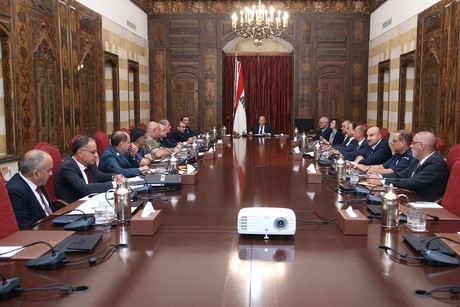 Lebanon’s Higher Defense Council on Tuesday stressed “the right of the Lebanese to defend themselves with all means against any aggression,” in the wake of Israel’s latest drone attacks in the country.

“This is a right that is enshrined in the U.N. Charter,” the Council added in a statement, emphasizing that “national unity remains the best weapon in the face of the aggression.”

The meeting was chaired by President Michel Aoun and attended by Prime Minister Saad Hariri, the ministers of defense, interior, foreign affairs and finance, and the heads of security agencies.

“The President underlined the need to defend Lebanon’s sovereignty and territorial integrity because it is a legitimate right,” the statement added.

Prime Minister Saad Hariri meanwhile told the Council that a complaint against Israel has been filed with the U.N. Security Council via the Foreign ministry.

Hariri also briefed the Council on his contacts with the international community, noting that “this is the first attack of its kind since 2006 and the first violation through which Israel seeks to change the rules of engagement.”

Speaking to reporters after the meeting, Hariri said: "I reassure you that there is nothing to worry about and we only fear God."

Hizbullah chief Sayyed Hassan Nasrallah had on Sunday vowed to "do everything" to thwart Israeli drone attacks in Lebanon, threatening to down any unmanned aircraft that violates Lebanon’s airspace. He also pledged to retaliate from Lebanon against an Israeli airstrike that killed two Hizbullah members in Syria.

The Lebanese have a government and a so-called army who according to the constitution is the only authorized entity to carry arms and defend the country. The statement above refers to hezbollah and hezbollah only.

Yeah, coz the Lebanese do not have an army, a government or security agencies. They have to defend themselves by themselves or in other words through the Iranian terror militia of hezbollah.

lol
The higher defense council is made up of veteran battle-hardened good for nothing self-centered losers:)

“the right of the Lebanese to defend themselves with all means against any aggression,”
What about Hizballah aggression, getting away with breaking resolution 1701 and continuing to carry arms against the law of the country.
How about the government dealing with the internal problems of Lebanon first.