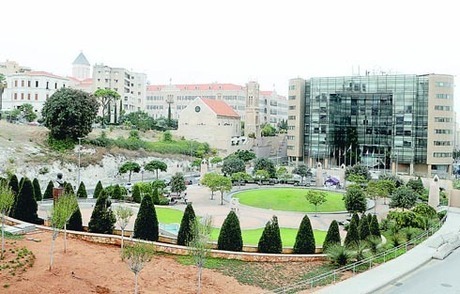 Major roads near a U.N. building in Downtown Beirut, ESCWA, will soon be open 24/7 after an eight year closure imposed in 2011 as part of security measures to protect the building.

In 2011, roads leading to the U.N. Economic and Social Committee for Western Asia (ESCWA) headquarters in Downtown Beirut were closed.

The move drew criticism then as it affected the traffic given that the roads near ESCWA are vital for commuters.

Dashti commended Hasan for “the great efforts she is making not only at the level of Lebanon, but also at the regional level."

"She is an honorable model for Arab women," she said. "We have prioritized solutions that ensure the safety and security of United Nations personnel, all the while preventing burdens on the commercial center of the country," Dashti added.

"As some may already know, the roads have been closed under certain security conditions that Lebanon was going through. The conditions have changed and the security situation has stabilized, and we, like ESCWA, support the stability and economic and social development of this country."

"Today, we are sending a message to the international community and foreign investors that Lebanon is stable and secure. We hope that the actions of the United Nations, in all its organs, will help Lebanon improve its economy, better its living conditions and create jobs for young people," she added.

For her part, Hasan said: "When I assumed my duties as Minister of Interior, I took it upon myself to take certain steps, albeit small, to improve the lives of citizens and facilitate their affairs."

Hasan said the road linking Downtown to Salim Salam tunnel would be open by Friday, while the opposite lane will be opened after one month. “We hope to have made a simple step to improve the people's daily lives," the minister said.

this small step is a bigger achievement than what all these other deadbeat dinosaurs have done for Lebanon in the last 20 years. Raya for Prime Minister!